“It wasn’t what I originally planned on doing with my life, but this is what God had planned for me,” said an enthusiastic Kruser, 26, who grew up Catholic and participated in parish activities throughout her younger years and at college. 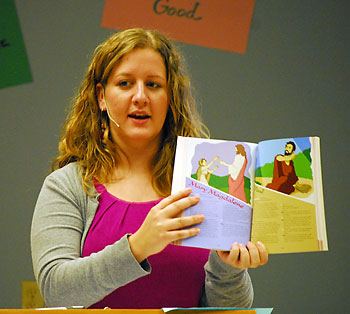 Kari Kruser, coordinator of middle school and high school religious education at St. Peter the Fisherman Parish in Two Rivers, said the training she has received from the diocese has helped prepare her for youth ministry. (Submitted Photo, Josh Diedrich | For The Compass)

But Kruser acknowledged needing a helping hand once she arrived at St. Peter the Fisherman two and one-half years ago.

And that’s where the Bishop’s Appeal, the annual fund-raising campaign in parishes across the Diocese of Green Bay, proved invaluable. The 2013 Bishop’s Appeal kicked off earlier this month.

“I didn’t go to school to be a youth minister, and I didn’t go to a Catholic college,” Kruser said. “I knew some things, but I had a lot to learn about the diocese and teaching in religious ed. So the Bishop’s Appeal really helped me with that.

“They put on a lot of training activities, which were really helpful. And we’ve had conferences and workshops, too, and those have been great and really encouraging for me,” explained Kruser. “And the networking we’re able to do at the meetings is important, too, because we can’t do this alone. There’s so much we can learn from each other. Without the Bishop’s Appeal, I doubt I would have been able to go to all of those activities.”

The Bishop’s Appeal is important, she added, “because it helps us to grow in our field and be current on the things we need our teens to know.”

Sr. Jacqueline Spaniola, the director of religious education for the Diocese of Green Bay, said that some of the money raised from the Bishop’s Appeal helps to pay for activities — and the means to attend those activities — like the leadership events in which Kruser participated.

Sr. Jacqueline, a Franciscan Sister of Christian Charity who worked at St. Peter the Fisherman when Kruser first started there, said she’s thrilled to see Kruser excelling in her new position.”She’s very good at what she does, and she loves doing it,” said Sr. Jacqueline. “She loves helping young people and we love seeing that.”

Kruser’s interest in working with teenagers dates back to her junior year in high school. She and a friend started teaching religious education to elementary school students. At UW-Stevens Point, where Kruser ended up graduating with degrees in vocal music and family life education, she participated in a youth ministry program.

“I went to school for five years, so every year I was teaching religious ed to middle school and high school students,” said Kruser, who also helped plan retreats, camping trips, service projects and other youth ministry activities while in college. For four years, she also assisted at Catholic Heart Work Camp.

“Through all those things I really realized I loved youth ministry,” Kruser said. “I really love working with my teenagers and I see the need for God in their lives. If I can help them get closer to God, that’s a wonderful gift.”

These days, Kruser interacts with teens primarily on Wednesday and Sunday evenings.

The Sunday activities she oversees involve about 80 freshmen, sophomores and juniors, as well as 13 teachers for whom she serves as a resource person.

“Typically, the students go to Mass at 6 p.m. and then go to class, where we have a snack and then an opening activity,” Kruser said. “Then I give a talk, usually, and they break up into small groups and have discussion questions and then we close in prayer.”

The Wednesday activities involve about 50 students in grades six through eight, plus seven teachers with whom she works.

“Both of those days are very busy, and then the rest of the week I’m busy doing prep for all of that, answering parents’ calls, attending meetings and lots of other things,” she said. “I’m very busy, but I like that.”

Kruser said her job is blossoming thanks in part to the support she has been given by the Bishop’s Appeal.