This is Taylor’s fourth year running the story time program, held once a month on a Friday morning at St. Bernadette School. Now other schools in the St. Francis Xavier School System have adopted the program. 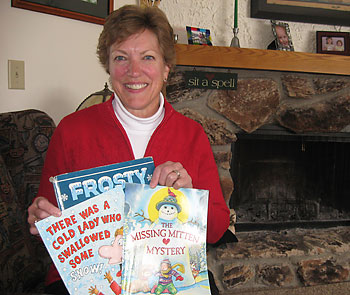 “It starts at nine and goes until 9:45 … depending on the involvement with the kids,” she said. Children ages 2, 3 and 4, along with parents and grandparents, are asked to be part of the class. “It’s stories and finger plays. We act out different plays and there’s a lot of songs.”

Taylor said it took her a short time to learn what the children could grasp.

“The first year it was real interesting because I’d come up with all these ideas we did in kindergarten and you start throwing out this stuff, and the kids are just not there,” she said. “They just want the basics — read me a story, have some fun, get me to move around, entertain me and I’m good.”

The children attending the extended care program also join Taylor for story time. “We’ve done lots of fun crafts and the parents are there to help. I get stuff from the library or St. Bernadette’s library or my files. Sometimes it’s seasonal. At Christmas I give them the glitter and oatmeal mix that they can throw out on Christmas Eve to help guide Rudolph to their door.”

According to Taylor, the best thing she ever did with the story time also happens at Christmastime. “I read the kids a Santa Claus story. We talk about baby Jesus, read the Nativity story and I say, ‘Now we’re going to act it out. Who wants to be Mary?’ I just have towels and a doll — simple props. We’ve got a Joseph and a Mary and a little donkey and an inn keeper. Lo and behold the baby is born. It’s so precious. Every year it’s a little different depending on the kids and their cooperation.”

Next school year will be the last one that St. Bernadette School will be open, but Taylor stills plans to spend as much time as she has been at the school.

“I love the kids and I love seeing my friends that I’m still in contact with. The attachment with kids and that connection, I just wouldn’t trade that,” she said. “With St. Bernadette’s closing, I have a year-and-a-half to enjoy it and then I’ll have to decide. I pray to the Lord, ‘Is there some way I can help the school system?’ because I’m very system oriented, always have been. If there’s some way I can help, let me know what that is.”