“I think it’s absolutely terrific,” he said. “I’m so pleased with how it turned out. After the blessing ceremony, one of our parishioners was so excited that she enthusiastically kept saying to me, ‘This is historic. The world should know about this!'” 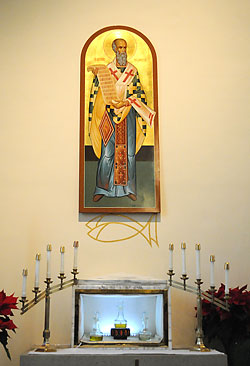 The icon of St. Gregory depicts the saint vested as a bishop holding in his hands a scroll containing a profession of faith in the Trinity. He is seen standing, looking toward the sanctuary in an attitude of adoration. The icon was commissioned by the parish and written by Orthodox priest, Fr. Yakov Ferens of California. (Benjamin Wideman | For The Compass)

Fr. Nelson came to the parish in 2011. After researching the history of the village and its parish, he decided that St. Gregory Church needed a visual representation of its patron saint displayed inside the building. The church was built in 1864, 10 years after Fr. Ambrose Oschwald founded the village.

Fr. Nelson originally looked for a statue of St. Gregory, but couldn’t find one.

“Abbot Nicholas said he knew a very good iconographer and told me, ‘You’ll never regret paying for quality, and Fr. Yakov will do a wonderful job,'” Fr. Nelson said.

Added Abbot Nicholas: “I think (Fr. Nelson) liked some of the icons he saw in our monastery and thought it would be a good idea.”

Abbot Nicholas noted that icons aren’t just art, per se, and they’re not painted, either. Rather, they’re sacred art that is written. “They’re holy objects,” he said.

Fr. Nelson tried contacting Fr. Ferens last spring, but it took him two months to reply because he was in Poland writing all of the icons for a church.

Once they connected, Fr. Nelson sent Fr. Ferens pictures of the interior of St. Gregory Church, as well as images of two other icons already inside the church on the side walls. One depicts Jesus Christ and the other depicts Mary holding Jesus. Both of those icons were donated by parishioners several years ago.

Fr. Ferens began work on the icon in July and finished in mid-December. A blessing ceremony was scheduled for Jan. 30 — which coincided with the feast of the Three Holy Hierarchs, which includes St. Gregory. The icon arrived via FedEx on Jan. 25.

Bishop David Ricken was scheduled to attend the blessing ceremony, but a snowstorm prevented him from attending.

However, many parishioners in the village were able to attend, as were all six of the monks at Holy Resurrection Monastery.

The green on the bottom part of the St. Gregory icon complements the green in the church floor. Other colors within the icon match colors seen on the church’s other icons.

The new icon shows St. Gregory holding a paper that reads in English with a Greek style: One God In Three Persons Equal And Distinct / Father, Son And Holy Spirit / A Triple Light Gathered Into One Splendor.

“We’re very pleased that the icon is now at the front of the church for everyone to see,” said Fr. Nelson.

He said the church intends to make Jan. 30 its annual parish feast day, to coincide with the icon’s dedication day.