In his homily, Bishop Ricken recalled his reaction after Pope Francis appeared on the balcony of St. Peter’s Basilica wearing a simple white cassock and waving tentatively to the thousands of rain-soaked onlookers below in St. Peter’s Square. 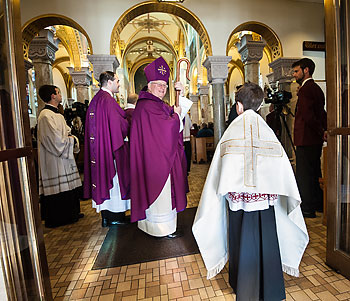 Bishop David Ricken and Fr. John Girotti prepare for the opening procession at the Mass of Thanksgiving held March 17 at St. Francis Xavier Cathedral. A large crowd of people turned out for the Mass to pray and give thanks for the election of Pope Francis. (Sam Lucero | The Compass)

Bishop Ricken, referring to his own remarks to the media immediately after Cardinal Jorge Bergoglio was introduced as Pope Francis, said the name Francis was a surprise to the world.

“It has never been used before by any pope in the church,” said Bishop Ricken, “and at first I thought it was (in honor of) St. Francis Xavier,” a member of the Society of Jesus religious order, to which Pope Francis belongs.

Bishop Ricken shared the story that Pope Francis told the media on March 16 about choosing the name Francis.

“When it looked like all of the votes were gathering in his direction, a cardinal friend of his (Brazilian Cardinal Claudio Hummes) said to him, ‘Have courage. … Then he said, ‘Remember the poor’ because (Pope Francis) has been an advocate for the poor,” said Bishop Ricken. “So he was struck with those words that the cardinal uttered to him. Remember the poor. And then came to his mind St. Francis of Assisi.”

St. Francis, known in Italy as the poor little one, “embraced poverty totally,” said Bishop Ricken. “I like to think of St. Francis as an icon of Christ. To look at Francis, and to know about his life and witness, is to see Jesus himself.”

Bishop Ricken said he believes Pope Francis is calling the faithful to be more like Christ, “to place Christ at the center of our lives even more than we have before, and to come to him as poor little ones.”

After reflecting on the Gospel for Sunday, in which Jesus told an adulterous woman she was forgiven and to go and sin no more, Bishop Ricken recounted Pope Francis’ homily for the fifth Sunday of Lent.

Catholics are asked during Lent to approach “God’s throne of mercy, which is the confessional,” the bishop said. He noted that the Lenten initiative, “the Light is ON for You,” has brought back many people to the sacrament of penance and reconciliation.

“As priests, the greatest things we can give to the church are the sacrament of the Eucharist, the sacrament of penance and the other sacraments of our church,” said Bishop Ricken. “These are the ways that Jesus reaches out and touches souls.”

He encouraged everyone to make Lent “and this new fresh beginning that Pope Francis is giving us” an opportunity to approach the Lord in humility and love.

“This Mass is offered for Pope Francis and for the church at this time of new beginning,” added Bishop Ricken. “Use this moment to help you and your family and your church to be the bride of Christ, to be pure once again, to be innocent and to lay down your lives in loving service to those who need us.”