Bishop Ricken on papal election: ‘What a surprise’

“This is totally a new change, a sea change, I guess you could say,” Bishop Ricken added, “in that we have a non-European, and so to communicate to the world that the church is universal or global … and draws her leadership from anywhere in the world wherever the Holy Spirit inspires.” 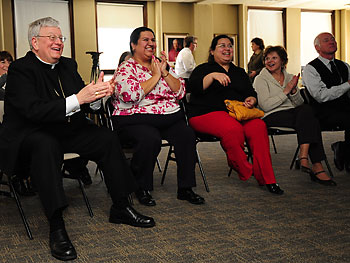 Bishop David Ricken and members of the Diocesan Curia react to the election of Pope Francis March 13. The diocesan staff gathered to watch live coverage of the announcement of Cardinal Jorge Mario Bergoglio of Argentina as the 266th Roman Catholic pontiff. (Sam Lucero | The Compass)

Since the Diocese of Green Bay has St. Francis Xavier, a Jesuit missionary, as its patron saint and since the new pope is a Jesuit, Bishop Ricken speculated that the papal name “Francis” could refer to St. Francis Xavier as well as Francis of Assisi. (This was before the choice of papal names was clarified by the Vatican deputy spokesman, Fr. Thomas Rosica, later in the day.)

“In this year of the new evangelization,” the bishop said, “we need to reach out once again as did Francis to take the Gospel to places that haven’t heard it or to reintroduce it as Pope Benedict said to people who’ve heard it throughout the Western world.”

Bishop Ricken noted that, last October, he had named St. Francis Xavier as the diocese’s patron of the Year of Faith.

“What an interesting coincidence, or as we say 5n the ch4rch, Providence, that this has happened and our new pope is named Francis,” the bishop said.

There will be a special Mass of Thanksgiving for the new pope at 9 a.m. on Sunday, March 17, at St Francis Xavier Cathedral. The bishop also asked that special prayers for the new pope — and for pope emeritus Benedict — be offered in churches across the 16-county diocese. The new pope will be installed on March 19, the feast of St. Joseph.

“It’s going to take us a while to get our minds wrapped around a new person from Latin America the pope, but what a wonderful journey this is going to be,” the bishop concluded. 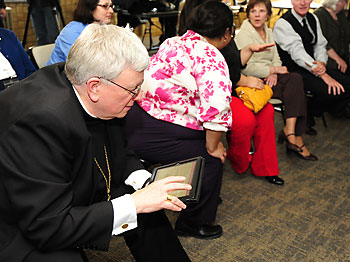 Several diocesan staff members had gathered with the bishop to watch the live TV feed on a big-screen. Applause and cheering broke out as the new pope appeared in the balcony over St. Peter’s Square. When some people expressed concern at the age of Pope Francis — 76 — Bishop Ricken noted that, while Pope John Paul II was 58 when elected, “but at age of 76, he was still very vibrant and connected with youth. So part of it depends on the personality and characteristics of the person.”