There are places throughout America where Sicilians settled in larger groups, and that includes Rockford, Ill., Rhyner’s hometown. Rhyner remembers as a child (her maiden name was “Fiorenza,” which she said was the 15th-century spelling for “Florence”) visiting the homes of family and friends where the St. Joseph Altar had been lovingly set up. 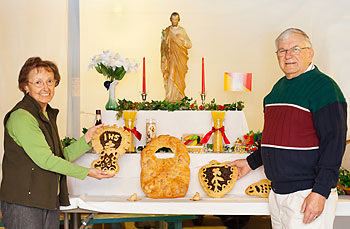 Lenora and Charles Rhyner display some of the breads that will be part of their St. Joseph Altar. The tradition of creating an altar to St. Joseph dates back to the Middle Ages and began in Sicily. Lenora, who was born on the feast of St. Joseph, March 19, has Sicilian heritage. (Jill Hogan | For The Compass)

The grand display traditionally served as a way of giving thanks, she explained. Weeks, and perhaps even months, of preparation go into the table that features at its high point a statue or perhaps portrait of St. Joseph, adorned with palms and the lilies for which he is known.

And then there is the food: traditional Sicilian delicacies that range from meatless entrees to the finest and fussiest of Italian cookies and pastries.

And ever since last year’s memorable travels in Sicily, the Rhyners have been thinking about doing a St. Joseph Altar themselves. With their 50th anniversary in the offing on June 15 and with a wealth of friends to share her Sicilian heritage, they decided this would be the year to give it a go.

“This is truly a new experience for my husband and myself,” said Rhyner, a retired Spanish teacher, emphasizing that her husband is just as much a part of the research and planning as she is. He has hand-built the three-tiered altar they will be using, and together they took a workshop in Rockford on Feb. 25 to learn how to make the intricate symbolic breads that will adorn their St. Joseph Altar. Those filled with figs are known as “spera,” which Rhyner said translates in Sicilian to “monstrance.”

And on the way home from Rockford they stopped in Milwaukee at an Italian grocery store to pick up items they will need for the foods they will prepare for invited guests.

The couple are members of St. Bernard Parish in Green Bay, but Rhyner also works part-time as a pianist and organist at St. Mary of the Angels Parish in Green Bay. It is Franciscan Fr. Patrick Gawrylewski, St. Mary pastor, who will come at 4:30 p.m. on Monday, March 18, to bless their St. Joseph Altar. Guests will be invited from 5 to 8 p.m. that day as well as on Tuesday, March 19, the feast day of St. Joseph.

It is believed that the tradition of the St. Joseph Altar started when, in the Middle Ages, Sicily endured a terrible drought and famine, explained Rhyner. Sicilians prayed for relief through the intercession of St. Joseph and when it came, it is to him they gave their thanks.

Rhyner said there are four reasons the tradition endures. It is a religious event, but it has also become a celebration of Sicilian culture, history and artistry, she noted.

Rhyner searched for the appropriate statue of St. Joseph and found one through a fellow member of the Italian-American Club of Green Bay, of which she and her husband are members. It was in need of restoration, and her husband, a retired physics teacher from the University of Wisconsin-Green Bay, took the project on.

Friends will be in for quite a treat when they arrive to experience the St. Joseph Altar at the Rhyner home. On the menu are two traditional Sicilian dishes, “pasta con sarde” which translates to “pasta with sardines” and cod with capers and a special sauce. There will also be omelet-like frittatas.

For weeks the Rhyners have been preparing Italian cookies. A few have stories all their own, like those made with sesame seeds which traditionally represent the sawdust of Joseph the Carpenter. The pastry “pignolati” is pyramid-shaped and represents the pine cones that Jesus played with as a boy. Special candies with almonds will also be featured. And, of course, there will be cannoli and biscotti, as well as small custard-filled cream puffs topped with a cherry. There will also be the powder-sugared wafer cookies called “pizzelles” and fig cookies.

Placed on the St. Joseph Altar will also be a bowl of fava beans, an important tradition that comes from the Middle Ages.

During the drought it is believed that “the one crop that grew was the fava beans,” said Rhyner. “That was what saw them through these hard times.”

At a traditional St. Joseph Altar guests are each asked to take one bean home as a sign of good luck.

Rhyner said she’s not sure if she and her husband will take on the St. Joseph Altar again next year, and jokingly adds they may just serve as consultants for someone else instead. But it has been a fulfilling experience as she looks forward to celebrating her birthday in a very meaningful way this year. “It is a labor of love,” she said.