“He loved the work he was doing for the tribunal,” said longtime friend Fr. Ted Hendricks. “He may have died with an annulment paper in his hand.” 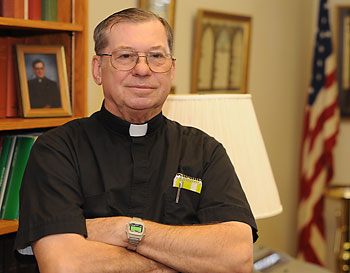 Fr. Lee Kahrs is pictured in his office at the chancery, where he served as defender of the bond on the marriage tribunal. Fr. Kahrs died March 17. (Sam Lucero | The Compass)

Fr. Hendricks and Fr. Kahrs became friends in 1953 when they started high school at Sacred Heart Seminary, Oneida. They were both part of the 19-member ordination class of 1965, the largest ever for the Diocese of Green Bay. Fr. Hendricks, pastor at St. Mary Parish in Black Creek, recalls how Fr. Kahrs overcame struggles early in his priesthood.

“I will remember the love he had for his parishes, but he found getting to know people to be very difficult at first,” said Fr. Hendricks. “Once he became comfortable, he really connected with the people. I know that all the parishes that he served appreciated him.”

Following ordination, Fr. Kahrs, a Two Rivers native, served as an assistant at St. Thomas More Parish, Appleton. He was appointed associate pastor at Holy Name of Jesus Parish, Kimberly, in 1970 prior to becoming pastor of Holy Family Parish, Elcho, with the mission at St. Mary Pickerel, two years later.

In the early years of his priesthood, he was involved with the Boys Scouts as a committee member for several troops. He was honored with the St. George Award from the Catholic Committee on Scouting.

Fr. Kahrs moved to Green Bay to work with the tribunal in 1975 and assisted at Annunciation Parish. His roles with the marriage tribunal included defender of the bond, pro-synodal judge and field advocate. In 1982, he became a pastor again when he was appointed to St. Isidore Parish, Osman. Fr. Kahrs also served as administrator at St. Casimir Parish in Northheim and as pastor at St. Mary Parish, Glenmore/Stark.

He enjoyed celebrating Mass in retirement, but found humor in his new travel schedule.

“When I was in a parish, I had three Masses a weekend at two churches and traveled five miles,” he said. “Now that I’m retired, I have four Masses at three parishes and I travel 90 miles.”

Fr. Hendricks enjoyed fishing with his close friend. They also traveled together over the years.

“We started going to Hawaii, but then switched to Mexico because it’s cheaper,” said Fr. Hendricks with a laugh. “(Fr. Kahrs) really loved going to Quebec for the Canon Law Society conferences.”

In a 2009 interview with The Compass, Fr. Kahrs said that his most memorable trip was a 1991 visit to the Vatican.

“I was able to have Mass with (Pope John Paul II) in his private chapel when visiting the Vatican for training,” he said.

His favorite part of priesthood was “sharing in the liturgy and meeting with people,” he said.

That joy continued in retirement.

“People don’t realize how attached priests become to the places we serve at as sacramental ministers,” he said. “When we leave a place, we leave part of our hearts there.”

Patricia Kasten contributed to this story.