Back then the show was called Celebrate Easter, noted Johnson. “The first act was more secular music celebrating springtime and it ended with an Easter parade. Then the second half was the Passion.” 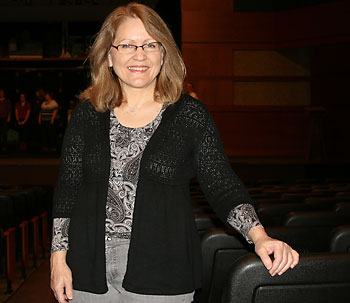 Kathy Johnson began performing with the Northeast Wisconsin Passion Play in 2005. She also helps with marketing and serves on a steering committee. (Amanda Lauer | For The Compass)

In 2008 the show format changed entirely to the Passion. “I think having it focus on the Passion is more fitting with the season,” added Johnson. “The timing of when the shows are, Palm Sunday weekend, really helps you prepare and move into Holy Week.”

In addition to being a member of the show’s chorus, Johnson, an alto, is also in some small group numbers. “I’m not a soloist — we have so many wonderfully talented people. I had sung with my church choir for a long time but really never had been onstage in front of people. (At first) I wasn’t sure if I could do it. But we get very good direction.”

Rehearsals for The NEW Passion Play are on Sunday evenings starting about eight weeks before the run of the show. The production dates this year are March 21-24 with shows for the general public on Thursday, Friday and Saturday evenings and matinees on Saturday and Sunday.

Being a part of this production has been a life-changing experience for Johnson. “What really grabbed me was how it changed my understanding of the whole Passion. You go to Mass on Sunday and you hear the readings and of course there’s the Stations of the Cross and all those other wonderful things that we have. But to be in a situation where you’re acting it out and seeing the other actors, you can get a better appreciation of it.

“You try to imagine what those people must have been feeling and thinking and it really gives you a different perspective. Personally it has really deepened my appreciation for the sacrifices of Jesus Christ,” she added.

Johnson enjoys seeing the audience reaction. “There are some of the numbers that they applaud and then more importantly, some that they don’t — like the crucifixion.”

Because of her involvement with The NEW Passion Play, Johnson also auditioned to be part of the cast of Christmas Stars. This past December was her sixth year. Now, not only does she perform but she’s volunteering in other capacities as well for both shows.

“I help with marketing for Christmas Stars and for the Passion play. I’m on my third year for the steering committee for the Passion play. It’s kind of like a board — we have monthly meetings throughout the year. Different people have different roles. We know we have our director (Jim Romenesko) but we line up the (other) key people. We make sure all the key roles are filled.”

Unlike many of her fellow cast members, Johnson isn’t doing the show with anyone from her family but it’s worked out fine. “There are other people who come in by themselves like me and everyone is so gracious and welcoming it’s like a family atmosphere,” she noted.

It takes a lot of work to put on a production of this magnitude every year but Johnson said it’s worth all the time and energy. “I feel like I’ve really added something to my Lenten experience and my Easter is so much richer. I’m glad to see a successful year wrap up but I look forward to the next year.”