Michalkiewicz and his DPM’s teammates advanced in the 45th annual Holy Cross Men’s Open, a basketball tournament that year after year attracts former college hoops players, including some who have played professionally. The 16-team field opened play March 15-17. The tournament continues March 22-24 with the championship game scheduled for 7:15 p.m. on Sunday.

The tournament began in 1969 when Bob Lamers needed to raise $300 for CYO (Catholic Youth Organization) jerseys. 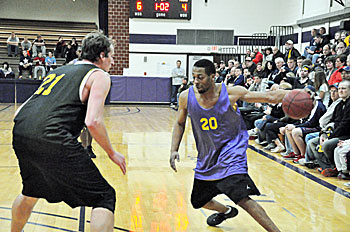 Jacob Nonemacher, left, of DPM’s defends Robert Thompson of the Lakers/Heat in a first round game of the 2013 Holy Cross Men’s Open, March 16 in Carl Giordana Gym, Holy Cross School, Kaukauna. This year’s tournament is the 45th annual. (Dick Meyer | For The Compass)

“He asked me if we could run a tournament and make some money,” explained Dan Verbeten. “I was involved with the athletic association, so we started the tournament. In the beginning, it was more local teams: Green Bay, Menasha, Oshkosh. Then we got involved in Milwaukee, Chicago and all over. We got the best Class A teams that were in the state of Wisconsin. There are very few college players from the state who have not played in this tournament at one point.”

The tournament’s Most Valuable Player award winners over the years have included former Marquette player Ric Cobb, current University of Detroit head coach Ray McCallum, Roy Boone, who played on the Wisconsin Badgers Final Four team in 2000, and Jeff Nordgaard, a former star at UW-Green Bay who played professionally for the Milwaukee Bucks and overseas.

Verbeten, the lone charter member of the tournament committee, recalls one year when six former professional players, including Len Chappell, were on rosters. A current NBA player, Greg Stiemsma of the Minnesota Timberwolves, played in the tournament following his senior season with Badgers.

“The fact that all these great players come to this little gym in Kaukauna amazes me,” said Lee Vander Sanden, who is now in his 20th year as tournament director. “Everybody who comes here is impressed when they get into the place. We take a lot of pride in that. We don’t pay money for winning. It’s strictly the honor of winning the tournament. It’s that competition level that keeps that drive in them.”

All proceeds from the tournament go back into the athletic programs for the Kaukauna Catholic School System. Funds raised from the annual Christmas tree sale also support capital improvements. Projects have included the $100,000 gym floor, $100,000 for new locker rooms, $50,000 for new bleachers and $50,000 for new gym doors.

According to Todd Van Harpen, a tournament chairperson, the gym floor was made by the same company that makes the NCAA Tournament floors.

LeVon Crawford of DPM’s, a former all-conference player at UW-Platteville, won the tournament’s first-ever slam dunk competition. Jordan Giordana, who recently finished his career at UW-Stevens Point, won the inaugural 3-point shooting contest. He also played for Weiner Investment Services of Appleton, which advanced on Friday evening. Giordana attended Holy Cross School, and the gym is named in honor of his late grandfather.

“Winning the 3-point contest in my grandpa’s gym means the world to me,” he said. “I always came here to shoot around. I would work out here in the summer. I feel that I had a home court advantage. I’ve been shooting in this gym forever.”

He plans to defend his 3-point title and play in the tournament for years to come.

“It’s a fun event and for a great cause,” he said. “It’s great competition. Next year, without (college) basketball, I will need to get into the gym a little bit more.”

Michalkiewicz, who played collegiately at Madison Edgewood after his prep career at St. Mary Central High School, also has memories of the Holy Cross Open from his youth.

“My dad used to play in these tournaments,” he said. “I remember sitting in the stands, watching the games. We were the kids running around getting autographs. It was something we looked forward to each year.”

The tournament now serves as a reunion of sorts for Michalkiewicz, who is the athletic director and basketball and baseball coach at Belmont High School in southwest Wisconsin.

“It’s nice to come back and be with my brothers (Rob and Jordan) and hang out with friends,” he said. “It’s a chance to come home. It’s fun, but at the same time, you want to win.”

Many of the players share the experience with their children. Verbeten remembers when Steve Showalter, the current coach at Germantown High School, brought his sons to the tourney.

“We got to see little Jake and Zach,” he said. “Now, Zach is at Wisconsin. We watched these kids grow up. It was the same with Lud Wurtz. His daughter, Taylor, used to shoot here when she was young. Now we see her playing on television for the Badgers.”

“It’s a family-oriented event,” said Vander Sanden. “My family comes home twice a year, for Christmas and the Holy Cross Men’s Open. All my girls live in Chicago. They look forward to this each year. It’s more than basketball.”

Raffles, a half-court shot contest, live music, food and a beer garden are also a part of the event. In addition to MVP and the all-tournament team, awards are given to the “Most Popular Player,” as voted by the fans, and an “Outstanding Fan” is honored annually. Six years ago, Vander Sanden started the Holy Cross Men’s Open Hall of Fame. Verbeten was inducted in 2008. The volunteers deserve the credit for the tournament’s success, said Vander Sanden.

“There are some long days,” he said. “We get out of here after midnight and you’re back here at 4 or 5 a.m. It’s a dedicated staff that does it for the love of the kids. Nobody gets paid and everyone seems to pull together.”

“The reason we keep coming back is because we don’t think of it as work,” said Steve Cerasoli, a member of the tournament committee. “We make it fun.”