Since the Advent season, the 450 youth who are part of the parish’s faith formation program, as well as students attending Lourdes Academy, have been learning about these three dimensions. They have collected funds to go to charities of their choice. 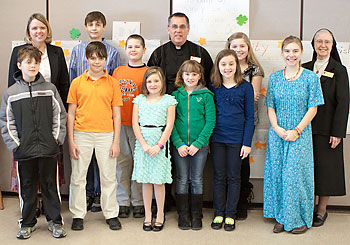 Each week during Mass, students donate funds which have been kept in a separate account. On their youth stewardship envelopes, the children also have shared services they have performed for family or the community.

All the students suggested charitable organizations that are important to them and their families. A Youth Stewardship Committee, with representatives from each grade level in the faith formation program, was convened to make the final selections this month.

With $1,500 to consider, the students looked at nominations in five categories:

Nation: ALS Association, which won (one of the parish’s youth had an uncle who died of the disease and she hoped that “no one should have to go through that again.); Red Cross; National Children’s Cancer Society; UNICEF; and Sacred Heart Southern Missions.

They voted to split the money evenly, with $300 going to each of the selected charities.

Two children gave impassioned pleas for their favored charities before the vote.

David Hammen, 12, asked for support for the Oshkosh Animal Shelter. He says his family got their pet at the shelter. “I care a lot about animals,” he said.

“I want to help animals get the food and shelter they need and help them get into safe homes,” added Hammen. “I think it’s important to get money out there to help any need. You should help as much as you can. God made everybody equal. We have to help people and animals be treated the same. That would make God glad.”

Johanna Koepcky, 14, supports mission work. “It doesn’t matter how long you live, but as long as you have Christ you’ll live forever,” Johanna said. “You can’t get anywhere in this world without money, for now at least. Change is not going to happen unless you give money to organizations. That’s how we’re going to make a difference.

“You can take care of the body, but we need to save the soul. If you have Christ, you will live forever. That is the best gift we can give them. … I pray that each organization can use the money to make a positive difference and we can make the world better in the eyes of Jesus Christ,” she added.

“It’s to teach the children about being good community members and a part of the parish,” she said. “You learn how to be a steward. Stewardship is a way of life. This also shows that the children’s ideas and voice are very important to us. They are eager to give. It draws the whole family together. The family unit learns a stewardship way of life.”