When the pope came out on the balcony, the cardinals also came out on the other balconies of St. Peter’s, and they were very visible in their red cassocks. Although the media talked about the cardinals being divided, you will not find another group of such diverse and unique men who are as united as they are: the fact that they barely took more than a day to choose the pope was a great sign of their unity, and their presence reminded us that they stood with the pope and they would help him lead the church. 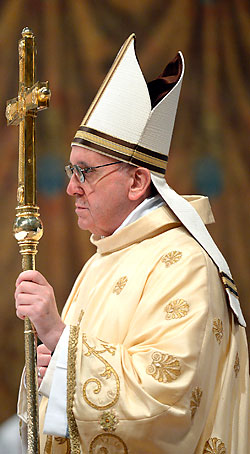 Pope Francis holds a crosier as he celebrates Mass with cardinal electors in the Sistine Chapel at the Vatican March 14, the day after his election. (CNS photo | L’Osservatore Romano)

We were all surprised to hear who had been chosen. Even though the priests who work in the Vatican know the names of most of the cardinals, he was not a man who got noticed. He is a very humble and simple man, who never called attention to himself. The more we learn about his character and his personal gifts, the more he seems perfect for what the church needs right now.

Before the election, I had been talking with another young priest and we both agreed that we would be disappointed if the pope were to choose a name that had been used before. Apparently Pope Francis felt the same way.

Pope Benedict was a great gift to the church, and above all I believe that his papacy brought a conclusion to the period of the Second Vatican Council: his papacy was the last word on the council and now it is time to close that door because the church needs to move forward. Having a pope chosen from the Americas, the “New World” as it was called, with a new name, is a wonderful affirmation that this is the beginning of a new chapter in the life of the church.

Where will the church be going? I will venture a guess, since I think that the name of St. Francis and the personality of our new pope gives us a clue. I think that the Christian people are called to become a people of deep prayer, of strong love for God and for the Blessed Virgin Mary and of great simplicity of heart. The modern world is very complex and very materialistic, and it is easy to get tangled up in all that mess. Speaking of which, I hear that the new pope has a devotion to Mary, Untier of Knots.

Fr. Benjamin Sember is a priest of the Diocese of Green Bay serving at the Vatican. This column originally appeared on Fr. Sember’s blog, http://brotherpriests.com, which he co-authors with his brother, Fr. Joel Sember.