Steube will be among the people in a Rite of Christian Initiation of Adults group who on March 30 will be received into the church at St. Francis of Assisi. She and the others will make a public profession of faith before receiving the sacraments of confirmation and Eucharist at the Grand Avenue site in Manitowoc. 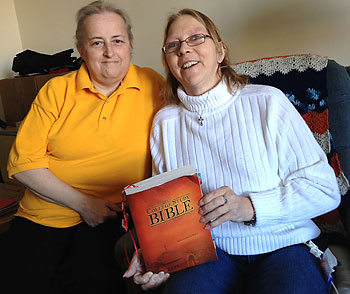 Bonnie Steube, right, is pictured with her RCIA sponsor and cousin, Nancy Ottum. Steube, who will receive the sacraments of initiation at the Easter Vigil, holds a study Bible she received from the RCIA group at St. Francis of Assisi Parish in Manitowoc. (Benjamin Wideman | For The Compass)

“Bonnie has very whole-heartedly put herself into this, and it’s wonderful to see her becoming part of the church,” said Sr. Mary Ann Spanjers, a member of the Franciscan Sisters of Christian Charity, who’s in her first year as St. Francis of Assisi RCIA director. “She came to us with a desire to find a home spiritually and be part of a community. And she very quickly embraced the journey.”

And what a journey it has been over the decades.

Steube was born and raised in Janesville, where she was baptized Lutheran.

Over time, however, her father stopped believing in the Lutheran faith, Steube said, so they left the church. Shortly thereafter, her father found a Baptist church he liked, so the family began attending services there. Steube was baptized as a Baptist in her early 30s.

Steube’s family remained with the Baptist church for about five years before they left because of a falling out her father had with the church leader.

Not long after, Steube and her family became aligned with a nondenominational church, and they stayed with it until her father died in June 2011.

When Steube moved to Manitowoc for good on Dec. 3, 2011, she was still attending a nondenominational church.

“I figured if I was nondenominational in Janesville, I’ll be nondenominational here in Manitowoc too,” she said. “So I found a church here, but I just wasn’t very happy. I just didn’t feel like I was at home there.” 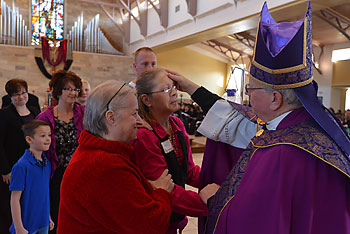 Bishop David Ricken offers a prayer and blessing over Bonnie Steube, a candidate for the sacraments of initiation, during the Rite of Election and Call to Continuing Conversion, which was held Feb. 17 at Our Lady of Lourdes Church in De Pere. Steube, who uses a feeding tube to eat, will receive the sacraments of initiation at St. Francis of Assisi Church in Manitowoc. (Sam Lucero | The Compass)

That’s when Steube’s cousin, Nancy Ottum, suggested she come along for a Mass at St. Francis of Assisi’s location on Waldo Boulevard in Manitowoc.

“I never thought about being Catholic before that,” Steube said. “But I went there with her on a Sunday night in January, and Fr. William (Van Dynhoven) was preaching. And he just tugged at my heartstrings. I had a feeling that’s where I was supposed to be.

“I had double pneumonia, and they were ready to call last rites on me,” Steube said. “They didn’t think I was going to make it. And that scared me.” She decided it was time to take her desire to join the church seriously.

“That’s when I said, ‘Nancy, we really need to get on the ball here. I really want to be a Catholic because I need God in my life. I need to be at St. Francis of Assisi.'”

Steube said that while she was recovering at a Green Bay hospital Fr. William came to visit her. She said she reiterated that she wanted to be in the Catholic Church, specifically at St. Francis of Assisi.

Fr. William put Steube in touch with Sr. Mary Ann, and Steube — by this time with a feeding tube attached to an IV pole alongside her most of the time — began attending the 1½-hour-long RCIA sessions on Tuesday nights.

Ever since, Ottum has been serving as Steube’s sponsor. They both live in the same Manitowoc apartment building, although in different units.

“If Bonnie has any questions, I stand behind her,” Ottum said. “If she has any problems she knows she can come to me.”

Steube did just that on Feb. 17, when she wanted to see Bishop David Ricken in De Pere as part of a Rite of Election liturgy.

“I really wanted to go see the bishop but I didn’t know how I would get there, because I needed my IV pole,” Steube said. “So Nancy said, ‘Where there’s a will, there’s a way.’ So she shoved me and the IV pole in the back seat of the car, and her and Sr. Mary Ann and I drove up there.

“I was so shocked the bishop took the time to bless me. That whole thing was unreal, just mind-blowing for me.”

As part of the RCIA sessions, Steube received a study Bible and a catechism that she said she enthusiastically reads.

“I have homework every week, and I love it,” she said, laughing. “It’s not like high school. I like this kind of homework.”

Steube still eats via the feeding tube — “I can’t eat normal food or I get sick” — but she now has a backpack to house some of the medical equipment, making movement easier than when the tube is connected to the IV pole.

She still goes to church on Sundays, and her health is improving.

“I’ve seen Bonnie become more confident and physically healthier since RCIA started, and I’m very happy about that,” Sr. Mary Ann said. “I’m just so inspired every time I see her. I’ve been impressed and inspired by her desire to become Catholic and do everything along that journey in spite of her physical health.”

Steube said she’s grateful to Ottum, Fr. William and Sr. Mary Ann, as well as all the people she has met at St. Francis of Assisi.

“The people have given me such a warm welcome,” Steube said. “Strangers are welcoming me with open arms. It’s like, wow! I can’t believe it. It’s so nice to feel at home.

“I just wish I didn’t wait so long and have to get so sick to wake up and smell the coffee.”