Sustaining dedication to parish ministry is topic of Team Days

It was the first time a husband and wife team served as presenters. Michael Carotta is the former executive director of the National Catholic Educational Association’s (NCEA) Department of Religious Education. He speaks at religious education conferences around the country on the topics of adolescent spirituality and vocational renewal. 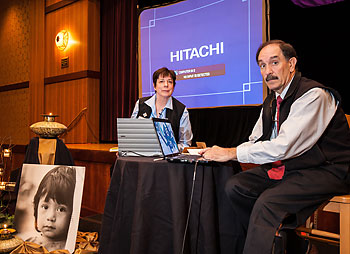 Michael and Cathy Carotta, were presenters at this year’s Team Days held March 7 and 8 at the Radisson Hotel and Conference Center in Green Bay. The couple spoke to parish leaders about “sustaining the spirit.” (Sam Lucero | The Compass)

Catherine Carotta is a speech pathologist who specializes in working with children who are deaf and hard-of-hearing. While completing her doctoral work, she developed an approach to vocational renewal. She also designed a vocational retreat program titled “The Work of Your Life: Sustaining the Vocation to Teach, Lead, Serve.”

The Carottas offer a handful of presentations together each year on topics related to work and ministry as a vocation, they said. “It’s her doctoral work,” said Mike Carotta. “I help put it into English. She’s the author of this work, but she’ll say it’s not her vocation to do the large-group presentations. Her vocation is to do her work with childhood deafness.”

Mike told The Compass that, while many presentations for religious educators focus on “how to be more competent with your work in ministry,” he and Cathy focus on “how do you sustain your spirit that fuels your commitment to this ministry and this calling.”

He said sustaining one’s spirit in a vocation is not limited to ministry. “It’s a challenge … for all people who feel a sense of calling to their work,” he said. “We’ve done this for oncology nurses, for youth care professionals. … If you feel a calling to your work, then there is a greater sense of urgency and commitment to it.”

During one of their presentations on March 8, the Carottas spoke about the challenges that put vocational lives at risk. They offered suggestions, which they called practices, people can adopt. One challenge to ministry that they presented is mediocrity.

“Why is it a challenge? Because it’s a lullaby,” said Mike. “And the lullaby has the same refrain: ‘It’s good enough.’ … If you accept mediocrity it puts you on a dangerous path toward ineffectiveness. If you are on that path and you come to the intersection of apathy, your candle will go out.”

He explained that the practice of testimony would prevent mediocrity.

“This is where you stand up and testify to one teammate or 31,” said Carotta. “You use words or actions, but you respond to the lullaby of mediocrity by saying, ‘That’s not good enough, guys.’

“Even if I don’t know how to fix it, I have to say ‘I don’t think that is good enough.’ Once you do that, you avoid that path of ineffectiveness,” he said. “You also say, ‘I’m willing to be accountable.’ It’s a courageous practice.”

Tony Pichler, lay ministry formation director and Team Days coordinator, said that leadership was chosen as a focus of Team Days in response to Bishop David Ricken’s 2011 pastoral letter, “Parishes: Called to Be Holy, Fully Engaged and Fully Alive.” He learned about the Carottas while attending a national lay ministry conference, where Mike Carotta spoke.

“This concept of vocation, calling and leadership resonated,” said Pichler. “We thought that having them come and break that open for us would really fit in with the bishop’s pastoral letter.” Having a married couple team up as presenters for Team Days “was an added bonus.”

The two-day conference offered opportunities for participants to reflect on their own ministry, said Pichler. “I get a sense that people are really digging deep into their own lives, their own ministry and doing some good analysis.”

Pichler said that holding Team Days during Lent fits in with the period’s time of reflection.

One of the highlights of Team Days took place March 7. At the opening prayer, 16 people dressed as saints took part in the prayer and the day’s activities.

“We had a March Madness-type of experience, where people filled out brackets, as you would for the (NCAA) basketball tournament,” said Pichler. “Our patron saint, Francis Xavier, actually won the tournament, so to speak, of saints.”