They feel blessed; they have their health and “we want to give something back to the community. We want to help the poor,” Pat said. 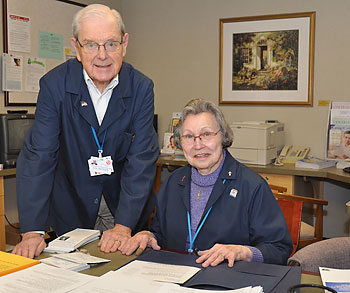 Pat and Helen Hart (Dick Meyer | For The Compass)

“We had five children who went through college and all have either a master’s degree or advanced degrees in their fields,” Helen said. “Their jobs took them around the country so we have no one here.”

Their daughter, Ann, in Madison is the closest. The others are in Arizona, New York and California.

In addition, they have one son-in-law, three daughters-in-law and eight grandchildren ages 14 to 22. “One of my grandsons is studying in Rome. He was there for the election of the pope,” Helen said.

So, with no family nearby to keep them busy, they turned to volunteer work. In addition to chairing the St. Thomas More Tuesday morning Bible study group, they are active in the parish, Appleton Medical Center, St. Paul’s Recovery Center, the Performing Arts Center and St. Vincent de Paul, where Pat works in the shoe department and Helen in the holiday department.

Pat also is an AARP instructor for the driver safety program and a vicariate representative on the Diocesan Pastoral Council.

Their volunteer and parish work has been a way of life for the couple, who will celebrate 54 years of marriage this year. They met at a dance shortly after they both began working. Pat invited Helen to a dinner at his boss’s house and they were married two years later in 1959.

After retiring, Pat joined other STM parishioners who were sorting donations at St. Vincent de Paul on Wednesday evenings. Helen joined him in 2000 “when they needed bows for the bishop’s visit. I had worked in gift wrapping at Pranges,” she said with a chuckle.

The Harts were members of St. Therese Parish in Appleton until St. Thomas More was built in 1963. They are charter members of STM and their children graduated from STM Grade School and Xavier High School.

Their resume of volunteer work is longer than their career resumes. In addition to parish ministries, they are working on the campaign to raise funds for remodeling at St. Thomas More Church. They also serve at the Fox Valley Warming Shelter as part of their parish.

When they reflect on their volunteer work, they light up when they talk about the connection it gives them to people.

“Pat started at (Appleton Medical Center) first, about 25 years ago,” Helen said. “I joined him a few years later. When the (Martha Siekman Cancer Center) opened in 2001, we started volunteering there every Friday morning.”

They sit with people, pray with them and bring them Communion if they want. “It’s not a major time commitment,” Helen said. They may be there a half hour to an hour and a half, depending on quickly they can get in to see the eight or nine people they visit.

“We are with the hospital 10 months out of the year,” she said. They save a couple of months for family and travel.

They regularly visit their children, Ann, Thomas, Michael, John and William. Each summer the whole family gathers for a camping trip. This summer, their destination is Cape Cod.

They also take time out for monthly bridge clubs, but even when they aren’t volunteering, they may be talking about it.

“We encourage others to volunteer. We try to be (public relations) for the places where we volunteer,” Pat said.

“Volunteering is a wonderful opportunity. It keeps you active,” he said.

“It keeps you young, and keeps you from thinking only about yourself,” Helen added.