Bushman is now ready to take up another sword, the sword of the Knights of the fourth degree, in order to fulfill a long-held desire to pay his respect to aging World War II and Korean War veterans. 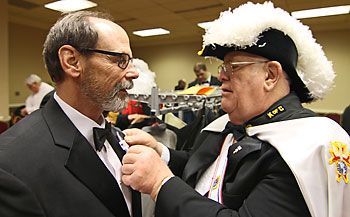 Bushman was one of 135 Knights of Columbus members from the eastern half of Wisconsin to be conferred the fourth degree, also known as the Knights’ patriotism degree during ceremonies April 13 at the Paper Valley Hotel in Appleton.

“It was the next step for me. I’ve been a third-degree Knight for 30 years. It was time to move on,” said Bushman, a member of Knights’ Council 5514 in Neenah and Assembly 1199 in Allouez.

“There are a lot of Old Glory Honor Flights coming yet and as a veteran I want to stand guard to welcome these guys back,” Bushman said. “They led the way to preserve the freedoms we have today.”

Patriotism is one of four virtues forming the backbone of the Knights of Columbus’ values. The other virtues are charity, unity and fraternity.

The Knights annually schedule fourth degree exemplifications, one each for the eastern and western portions of the state, to accept members into the patriotism degree.

The recent exemplification attracted the highest number of candidates for the fourth degree in years, said Roland C. Ransom of Mukwonago, master of the Knights’ eastern district.

“A year ago we had 70 candidates in the eastern district. This year we had nearly double that with 135 becoming fourth degree Knights,” Ransom said. “The fourth degree is the highest degree of the order. When you make the degree of patriotism you are a ‘sir knight.’ Patriotism to us means to be patriotic to and defend our country, its principles and the Constitution and the Bill of Rights.”

New fourth degree member Robert Kulesa of Green Bay said the patriotic degree “really fits home with what I am about.”

“Patriotism is at the core of my being,” said Kulesa, a U.S. Navy veteran of the Gulf War. “As a Knight for the past four years I’ve seen what good they do for our community. I felt maybe I was worthy to move up to the fourth degree. The patriotism degree goes hand-in-hand with the other virtues of the Knights of Columbus.”

Four Catholic priests were among the conferees on Saturday, including Fr. Arul Joseph Irudamoney, pastor at Most Precious Blood Parish in New London.

Fr. Joseph, who joined the Knights seven years ago, said he is proud to be a fourth degree Knight.

“I think they (fellow fourth degree Knights) are going to give to me rather than I give to them,” said Fr. Joseph, who served as chaplain of the Knights Council in Bismark, N.D., before coming to the Green Bay Diocese. “The more connected I get with the Knights to closer I feel to God.”

Fr. Joseph said the fourth degree theme of patriotism “is important, especially for our youth who need to be shown love for our country and respect for our governments.”