McCurdy, a member of St. Margaret Mary Parish, was honored to be asked to direct the premier performance at the fine arts center — “Guys and Dolls Jr.,” a play featuring the talents of students from Seton Catholic Middle School in Menasha. 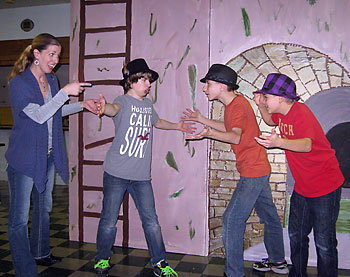 With three children in the TCCES system — Jack, 11, Annagrace, 9, and Mary, 5, McCurdy has done a fair amount of volunteering for the school system and was excited to be asked to do this project. She has an extensive background in theater and described how she went from living in Iowa to life on Broadway to teaching theater arts in Neenah.

“I grew up in theater. My mom was a musical director and as a teacher she taught K-8 music forever at St. Ann’s and then always did musical directing on the side and professional dinner theater,” said McCurdy, who went to a Catholic grade school and high school.

She received a full academic scholarship to attend Millikin University and majored in music theatre and had a dance minor.

“I always did summer stock and regional theater in the summer,” she said. Before her senior year at Millikin, she flew to New York City to meet some old friends. “I auditioned and I got two national tours. Theater ends up being a small world,” noted McCurdy.

The curtain closed on her acting career after meeting her husband.

“He was a producer at an ad agency. I was on retainer with my last show to go to Japan for three months,” she explained. “I met him, quit the show, got engaged and took a full-time job at the ad agency. I never knew my last show was my last show. In a year we were married and had a honeymoon baby.”

When McCurdy was a junior in college she had started a musical theater workshop at her old high school and continued the workshops even after she began touring across the United States and Canada. “With kids (being a Broadway actor) brought a little extra cache there. It was really important to show them that you can be cool and in the moment and be a Catholic. I feel like theater can be a platform to share my beliefs in a really soft sell.”

The McCurdy family moved to Neenah six years ago when John took a job at Kimberly-Clark Corp.

“I grew up very Catholic. When we moved here I felt very alone. That’s why my first thing was to find a Catholic school. We picked St. Margaret Mary’s because it smells like my grade school and then I met the principal Eleanor Healy and I loved her,” said McCurdy. “I saw (school children) go out for lunch and she knew every child’s name. I said, ‘This is the family I need.'”

Healy invited McCurdy to hold theater workshops at the school. “It would be good for you and good for the school,” McCurdy said she was told.

From that came McCurdy Theatre Arts, through which McCurdy teaches music, theater and offers private vocal lessons to children from throughout the area. During the school year she runs classes on weeknights and in the summer she offers a workshop for young thespians. Musical theater workshops run two weeks, offered to second- through sixth-graders and seventh- through 12th-graders. “We do music, choreography and a lot of dramatic exercise,” McCurdy said. “At the end of two weeks we put on a big showcase performance.”

McCurdy offers a musical theater performance summer trip for junior high and high school students. This year they will be performing in England.

“They’ll take stage combat at the Royal Shakespeare Theatre. They get to perform on the stage of the Globe Theatre,” she said. “We’re also going to do a workshop with the Unknown Theatre Company. What I’m most excited about is we’re going to partner up with a Catholic high school. … Their instructor will take my students for the morning and I’ll take his. We’ll lunch together, we’ll rehearse in the afternoon and do a combined performance together. I’m hoping they’ll find common ground with that and maybe some friends.”

Terri Bittner, whose daughter has one of the lead roles in “Guys and Dolls Jr.,” is glad to have McCurdy at the helm of this show. “The parents of Seton are absolutely thrilled. This has been quite the endeavor and to be able to have someone with Kathleen’s background to direct this — she is doing us a favor.”

McCurdy is anticipating opening day for the new performance arts theater. “I’m so excited to be doing this with these kids. These kids are so much fun. I love the show, I love the cast and being the first director at the new theater is icing on the cake. It should be a lot of fun.”