In living out her faith, she follows script

Much of her mission comes through theater work. As co-chair of the worship committee at Most Blessed Sacrament, she recently was asked to look at a Passion play script written by her pastor, Fr. Jim Jugenheimer, many years ago. 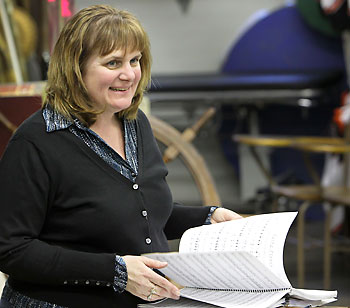 It originally was written for and performed by middle school students. Burazin said she took some of the dialog and combined it with new dialog, reworking the script until it was suitable for all ages to get involved in the experience.

She said about 40 parishioners were involved, including actors, props people and costumers.

“They ended up taking the story to heart and what Jesus went through for us,” Burazin said. “It added a lot of meaning to the story of the Passion. They almost lived through it because they were acting it out.”

She said Fr. Jugenheimer and pastoral associate Lyn Zahorik both were impacted. “Father thought it was beautiful,” Burazin said. “Both he and Lyn said that, at one point, they were speechless. They were in awe at how well it went and how touching it was.”

These reactions are similar to those she has seen with theater casts throughout her life, Burazin said. She started in theater while a student at Greenfield High School. “I worked myself up from usher to student director my senior year,” she said. She took a few general theater courses while attending the University of Wisconsin-Milwaukee, but has gotten most of her experience on the boards.

She has run the small, grassroots Milwaukee Youth Theater for 16 years, continuing to make the regular commute even after she and her husband moved to the Fox Valley area 12 years ago.

The group puts on three shows a year, and at least once a week — more often during productions — Burazin makes the drive.

“I love working with kids, and I love seeing super-shy children end up getting so much more confidence on stage and giving it their all,” Burazin said.

She also directs one show a year with Fond du Lac Community Theater and one show for a home-schooled group of students in Fond du Lac.

“It’s an opportunity for them to learn about theater and theater arts and a great way for them to socialize,” she said. “The big thing is working as a team. You see them all work as a team and show their enthusiasm, then all of a sudden you see all your hard work show in this final performance on stage. It’s exciting.”

She said being involved in theatrical productions gives people more confidence, builds up strong friendships with other people involved with the show and lets them discover skills they didn’t know they had.

She also contributed her expertise to a home school choir within the parish as they presented a Nativity play; assists with Most Blessed Sacrament’s Hallowed House presentation each year; has done dinner theater performances with St. Raphael the Archangel Parish in Oshkosh and teaches theater classes a few times a month at the Hartford Arts Center. She also volunteers time at the Garden Gate floral shop in Oshkosh to provide flowers for deserving people in the community.

She and her husband both cantor for Most Blessed Sacrament, and he also frequently plays trumpet and started a band to perform at nursing homes.

Because she didn’t marry until she was 40, Burazin said, she didn’t have a family of her own, but the people she has met and nurtured through her volunteer work have become her family.

“I was born and raised Catholic and went to Catholic grade school,” Burazin said. “I always bring in as much Christianity as I can into my pieces of work. I won’t do anything with swear worlds or violence. I taper things down.

“I feel that everything I do is a mission. I’m helping people and teaching them things constantly. I think I’m a better person for getting involved in all these activities, and I’m sharing my talents and my skills. I’m more of a project person, more of a doer. My faith is doing good with others and doing projects that turn out in a positive way. That’s the way my faith comes out.”