The store, situated in a former Pick ‘N Save grocery store on South Commercial Street, opened April 11 with a ribbon-cutting ceremony and official blessing of the store by Fr. Larry Seidl, pastor of St. Gabriel the Archangel Parish. 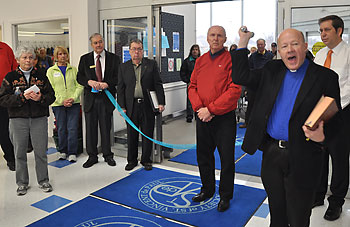 “It’s going to be a lot more fun to go through. It feel like you have more kinds of stuff to shop through,” said Van Linn, a Confederate Civil War re-enactor who frequently shops St. Vincent to look for objects that could pass muster as being from the 1860s.

“I look for wooden bowls, old jugs and fairly old bottles. With the size of this new store they can get more variety,” Van Linn said.

Many shoppers, like Peg Olk of Neenah, said the new facility looks much more like a regular retail store than a traditional thrift shop.

“I had no idea the store was going to be this gorgeous,” Olk said. “I like the cleanliness and quality of the merchandise and the store is so beautifully done and fresh.”

“Our goal when we laid out this store was for shoppers, when they walked in, to think they were walking into a traditional store like a Kohls, Shopko or Target even though they were in a thrift store,” Johnson said. “Judging by peoples’ comments we achieved our goal. That’s good to hear.”

St. Vincent de Paul purchased the store at an undisclosed price and is in the process of securing a mortgage, Johnson said.

He said the local St. Vincent de Paul group recently began a capital campaign to raise $350,000 to cover remodeling and renovation costs for the facility, which totals 47,000 square feet including office and storage space.

“One of the biggest benefits of the new building is we can get all our furniture out on the sales floor,” Johnson said. “We really needed to move to a bigger store because we were bursting at the seams at the old store.”

“We are getting more donations and we need to turn that into cash to help those in need. And the need is not going down in the Neenah and Menasha areas,” Johnson said.

Johnson said most of what happens at the Neenah St. Vincent de Paul does not involve the general public buying goods, but involves, with help from the Vincentians, a group that assesses the situation of those in need, supplying the poor with goods, services and financial help to cope with life.

“We’ve helped pay for rent, utilities, a nursing license so a person could get work, bus passes, food, you name it,” Johnson said.

Volunteers also appreciate the new store where a 4-foot-tall potted palm plant, its base festooned with blue ribbon, greets shoppers coming in the front door.

Lentz said her father, the late Ray Holewinski, was one of the first volunteer workers at the old Neenah store when it opened 25 years ago.

“My dad knew furniture and was one of the first to price furniture for the old store. Because of my dad, I started volunteering here. So I am a second-generation St. Vincent volunteer,” said Lentz. “My dad would be so proud of this new store that I bought the palm plant so he would be with me.”

Lentz said the volunteers really appreciate that the new store merchandising area is all on one floor.

“In the old store we sold sporting goods, shoes and luggage in the basement. All the volunteers are happy everything is on one floor,” she said. “And now it’s nice to know if you hang clothes on a clothes rack there will be room on the rack. They won’t be smooshed together so tight you can’t even get a hanger in there.”

She said the new store has better lighting and handicapped accessibility along with a new phone answering and paging system. “We are more like a business now,” she said.