These directives include being called to revitalize SSM community life in ways that give Franciscan witness for evangelization and being called to evangelize people today from diverse cultures. The delegates of the assembly also continued a discernment process for the next provincial leadership team. 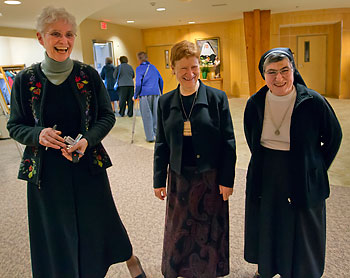 Sr. Marilyn Vollmer, left, provincial of the U.S. Caribbean Province of the Sisters of the Sorrowful Mother, is pictured with the order’s general assistant, Sr. Catherine Marie Hanegan, center, and general superior, Sr. Teresine Marra. Sr. Catherine and Sr. Teresine traveled from Rome to attend the provincial assembly in Oshkosh. (Jeannette Merten | For The Compass)

Delegates came from the Dominican Republic, Grenada, St. Lucia and Trinidad and Tobago in the Caribbean; and from New Jersey, Maryland, Wisconsin, Kansas and Oklahoma. The order’s general superior, Sr. Teresina Marra, and general assistant, Sr. Catherine Marie Hanegan, who came from Rome, also were present.

“It’s a process,” Sr. Teresina said. “We gather information from the body, they present a list of suggestions for leadership and the final decision is made later.”

Current provincial, Sr. Marilyn Vollmer, said that the selection of leadership is not a majority-wins kind of vote, so the discussions are done with integrity and from the heart.

“In this way, it’s more collaborative,” Sr. Teresina noted. “The religious chose to live the life of obedience. Obedience is a mature relationship between the leaders and those who are led. Obedience is not too much about power but a way to be organized. We have the same goals to fulfill our mission.”

The community lives their obedience, she said, “because Jesus first was obedient to God, and we follow Jesus.”

The Sisters of the Sorrowful Mother, Third Order Regular of St. Francis of Assisi, have been helping the poor and sick across the world since 1883. The sisters currently live and work in communities across the United States, including Oshkosh, Milwaukee, Stevens Point, Marshfield, Merrill, Weston, Wautoma, Rhinelander and Stanley, Wis.; Denville, N.J.; Wichita, Kan.; and Tulsa, Okla.

In addition, the sisters have ministry locations internationally in the Caribbean islands, Brazil, Germany, Italy, Austria and Tanzania. The provincial office for the U.S./Caribbean Province is in Oshkosh.

“In Rome in October, we started by asking sisters for their input, according to the needs of the times and of the church,” Sr. Teresina said. “This assembly builds on that. We need to revitalize our lives as consecrated women in the church. We also need to bring the good word. We feel we’re called to evangelize the people of our times and to start with ourselves. We need to find appropriate ways to improve these two directions.”

She said this is a challenging task because the locations that the sisters serve are widespread around the world. “We’re dealing with many cultures,” Sr. Teresina said. “When we come together, it’s a wonderful picture of different colors of people. It’s like a mini-United Nations. We have all the joys and challenges of multicultural unity.”

The sisters also have crafted a new mission statement for the order, one which includes colleagues in hospitals and missions at which they serve, whether or not they belong to the order or the Catholic Church.

“Whoever we work with, they’re our colleagues and they’re involved in the same mission, even if they’re not religious,” Sr. Marilyn said.

SSM ministries traditionally have been in education and health care. Their Marian Health System was merged earlier this month with Ascension Health to create the largest Catholic health system in the United States.

“We’re not unique,” Sr. Marilyn said. “There are many mergers going on in health care. “The challenges in health care today are complex and difficult to maintain. This merger will create a stronger base from which to operate and to preserve Catholic health care.”

SSM members also have been taking on many additional roles throughout the world to serve the poor.

One such project is dealing with human trafficking on an international level, Sr. Catherine said. “We are collaborating with others already working in this area,” she said. “If we’re a group of women, we need to be supportive of other women. We want to make systemic change.”

Women religious have worked with various owners of establishments where human trafficking is happening, trying to get their cooperation to stop the trafficking, she added.

Other projects include providing water and latrines in poor areas, empowering women by teaching them skills that could be used to start a small business, providing before- and after-school opportunities for children on the streets and working against violence in the home.

In the Oshkosh area, they serve at the Day by Day Warming Shelter, assist migrant workers, and do volunteer and charitable work in the communities.

“I hope we will be a sign of joy and hope for others wherever we are present,” Sr. Teresina said. “We can share our vocation and mission with young people so they can continue this wonderful mission that we have. And we need to prepare newer members so that they are adequately prepared for life and the ministry that we do.”

Above all, Sr. Marilyn said, they want people to know that the sisters in the order “are alive and well, working for the church and working for the poor. We don’t believe it is necessary to have large numbers, but it does take committed people.

“We believe in following in the footsteps of Jesus, and we believe our world needs this. To make a difference in somebody’s lives is a wonderful legacy.”