SMC soccer standout ready to go out on top

“My sister (Leisa) tells me to get 116 because she got 117,” said Conn, the Packerland Conference offensive player of the year in 2012. “The record is 118 (set by Rachel Brown). It would be a great accomplishment to achieve that goal.” 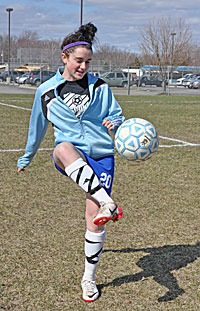 St. Mary Central senior Kelly Conn is closing in on the school mark for most goals scored. (Dick Meyer | For The Compass)

“We should be able to get back there because we have a good group of returning players that are juniors and seniors and some underclassmen have been stepping up and filling the roles of the players we lost from last year’s team,” she said. “We need to get to that next game.”

St. Mary Central last won the Division 3 state girls soccer championship in 2007 and most recently appeared in the championship game in 2009. The team has advanced to state seven of the last eight seasons, including Conn’s freshman season in 2010. The Zephyrs are also the two-time defending conference champions.

Conn was concerned that her senior season may be in jeopardy. She strained her patella tendon in February on the basketball court, ending her prep hoops career.

“I got hurt two minutes into the game,” she said. “I thought that it was going to affect soccer. I had physical therapy two times a week. I was able to be ready a day before soccer started.”

Conn first stepped on the soccer field at age 3 when she joined her sister’s team. Leisa, who now plays for Marian University in Fond du Lac, has been very influential in Kelly’s development as a player.

“It’s fun because she puts a lot of pressure on me and gives me great competition to work with on my game,” said Kelly. “She pushes me to improve and makes me a better player. She’s my best friend.”

Kelly also credits indoor and club level soccer for her success as a player. She played in an indoor league with the SMC boys team.

“They are more physical than girls and it makes me more physical when we are playing our games in the spring,” she said. “(The boys) are pretty competitive. I thought maybe they would lighten up a little bit, but no. My experience with my Allouez (club) team also made me a lot better. It’s really competitive. We go to Kansas and St. Louis and play really good competition.”

Kelly will play soccer at UW-Stout in the fall where she is interested in studying graphic design or early childhood education. Her experience at Central has prepared her well for college, she said.

“I really like going to school here because it’s small,” she said. “You get one-on-one time with your teachers. You get to know everyone in the school. You say hi to everyone in your class and you know everyone by name.”

She is also thankful for the opportunity to play for longtime coach Gary Kruger and appreciates his straightforward style.

“If you are doing a bad job, he will tell you,” said Kelly. “I love when coaches do that. Everyone on the team knows that he’s not trying to be mean. He is just telling you like it is to make you a better player.”

Kelly, the daughter of Thomas and Traci Conn, hopes the family soccer tradition at SMC doesn’t end when she graduates. She wants to see her younger brother, Ryan, return to the sport in high school. He also plays basketball and baseball. The girls followed in the soccer footsteps of their mother. Traci, who took up the game in the military, plays in both indoor and outdoor leagues.

When the schedule gets back on course, Kelly will close in on the scoring record. Accomplishing the feat with a header or bicycle kick “would be pretty sweet,” she admits. The crowning achievement would still be a state title.

“I’m hoping to make it to the final. I haven’t gotten there yet,” she said. “That would be the best feeling ever knowing that you ended your high school career winning your last game.”