ALLOUEZ — A lawn chair on a street corner, late on a Friday night in downtown Green Bay 10 years ago, led Tony Pichler on a journey that has become his passion and ministry: caring for those he calls “the most vulnerable in our community” — the homeless.

Pichler, who is lay ministry formation director for the Green Bay Diocese, recently won the Wisconsin Public Service Volunteer Award from the Volunteer Center of Brown County. Pichler, one of 70 nominees for the award, was cited for his work with St. John the Evangelist Homeless Shelter and as co-founder of StreetLights Outreach.

In nominating Pichler, Dan Robinson wrote, “Tony has led with great compassion, wisdom and hard work. Without his efforts, St. John’s might not exist to fill the great need to provide safe housing for our homeless brothers and sisters.” 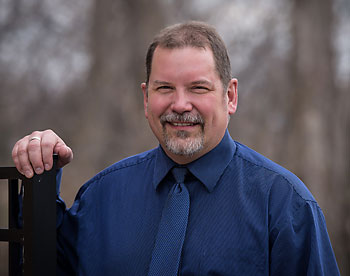 Tony Pichler, lay ministry formation director for the Diocese of Green Bay, received the Wisconsin Public Service Volunteer Award recently from the Volunteer Center of Brown County. He is co-founder of StreetLights Outreach and chair of the St. John the Evangelist Homeless Shelter board of trustees. (Sam Lucero | The Compass)

Pichler, who currently chairs the shelter’s board of trustees, has been with the shelter from its start in November of 2005.

“I’ve been there since before its beginning,” Pichler said of the shelter, “certainly every step of the way.”

His work with StreetLights — which he founded with Deacon Steve Meyer on that street corner in 2003 — led him to join the Brown County Homeless and Housing Coalition. There he learned about the problems of homelessness in Green Bay, especially for those who struggle with addictions or mental illness. He learned, also, that the solution required two things: funding and a facility to house a shelter.

Initial funding came from Karina and Lou O’Malley, who had run Crossroads Shelter for many years. A place to set up came from Sacred Heart Fr. Guy Blair, who was then pastor at St. John’s. Pichler and Deacon Meyer had suggested St. John’s as a place for a shelter, since it is located downtown and had unused space in its gym. Fr. Blair agreed.

“He really took to the idea,” Pichler said, adding that, “little by little we pulled it together for November of 2005.”

However, that was too late for the person Pichler considers his inspiration for his outreach to the homeless. One person he had met when StreetLights started was a homeless veteran named Rooster, who was an alcoholic.

“We talked to Rooster quite a bit and then we didn’t see him for quite a while,” Pichler recalled.

Later, Pichler learned that Rooster had died one night, under a downtown bridge.

“I was touched by that,” Pichler said. “That was a person we had been in relationship with. And yet it was a person who didn’t make it. That was the impetus for me to really begin a personal mission to not let that happen again.

“St. John’s was that opportunity to be a place for guests who didn’t have another answer, any other place to go,” he said, “so they won’t become another Rooster and die under a bridge.”

StreetLights Outreach continues to offer weekly ministry — and monthly block parties during the summer months — to help build community, as well as direct people to services like St. John’s shelter.

This year, Pichler expanded his time at the shelter, becoming a regular member of the nightly ministry he describes as “sort of a chaplaincy team. … It’s meant to be a ministry of presence. There certainly are people who just need a consistent presence in their lives, because that isn’t something they’ve had. For some, they want to talk about issues of faith, where they’re in their walk with God. Sometimes it’s just playing a game of cards.”

“He is there to listen and encourage guests who are facing trials and uncertainty,” she posted on the shelter’s Facebook site on the day of the award. “Tony eats alongside the guests and takes time to hear their stories.”

Pichler credits Wood and her staff as “really talented and gifted and capable and compassionate and caring.” He says they and the volunteers share in his award.

He concluded that everyone who helps at the shelter is doing “what the church does. We say that we’re followers of Jesus. One of the things we do as followers of Jesus is help those who are most vulnerable. You see that all through Scripture, both the Old and New Testaments. The community cares for — in scriptural terms, ‘widows, orphans and aliens’ — and in our terms, those who are homeless, addicted, who have mental illnesses, those who don’t have another answer. That’s what the church does. That’s what St. John’s will continue to do. No matter what.”