“The days and weeks went by and I couldn’t stop thinking about it,” said Deprey of De Pere. Neither could fellow Esto Vir participant Tom Schmit of Darboy. 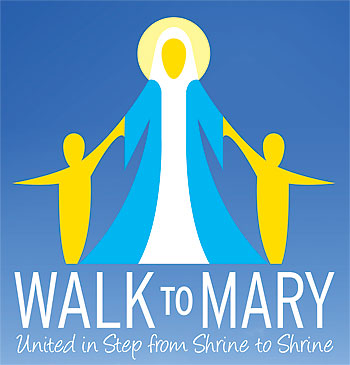 “Fr. Rocky said it could be done. ‘I want you to pray about it,’ he said,” Schmit said of the suggestion to hold a 17.5-mile walk from the studios of Relevant Radio to the Marian shrine in Champion.

Strangers to each other at the time, Deprey and Schmit did pray about a pilgrimage.

Weeks later, Schmit was searching for a work-related telephone number “and by chance Fr. Rocky’s number popped up.”

“I called Fr. Rocky. He said there was another guy interested in organizing a walk,” said Schmit.

Schmit and Deprey connected and began a year-and-a-half planning effort set to culminate May 4 in the inaugural “Walk to Mary,” a 21-mile, one-day walking pilgrimage from the National Shrine of St. Joseph at St. Norbert Abbey in De Pere to the shrine at Champion.

The change to a “shrine-to-shrine” pilgrimage came after a consultant for Green Bay’s annual Cellcom Marathon encouraged organizers to look to a starting place with space to hold a large number of people.

“We approached the Norbertines about starting at the St. Norbert Abbey,” Deprey said.

The Norbertines were so enthused they made plans to move a life-sized statue of Joseph holding the baby Jesus from the Abbey’s lower level crypt to the upper church where prayer services will be held prior to the walk’s 7 a.m. start.

“Then it was all about creating a route,” Deprey said. “A 21-mile pilgrimage is quite a distance for most people, especially in one day, but if you walk an average of 2.5 miles an hour — even children could walk that pace — we would arrive in Champion by 4 p.m.”

Mass will be celebrated in Champion at 5 p.m. Walkers will then be transported back to the starting point by bus.

Food will be available along the route. Pilgrims unable to complete the walk will be picked up and transported to the finish.

“We heard the challenge about the route, so we did break it down into five different segments to coincide with the Mysteries of the Rosary,” Deprey said.

Each segment offers participants a shorter walk with chances to enter at various points, including Ss. Peter and Paul Church, the University of Wisconsin-Green Bay, Holy Cross Church and the Champion shrine, where people can join the walkers for Mass.

Walkers will be bused across State 57 for safety reasons, Schmit said.

“One of our primary concerns is safety first and there is no way we could safely cross 57,” Schmit said.

There is a registration fee of $30.

“We are hoping to get 500 to 1,000 walkers,” Deprey said. “We think this walk will become very big in years to come. We plan on having the first Saturday in May every year. Hopefully it will get bigger and impact the lives in people in ways we can’t even imagine.”

Proceeds from the event will be awarded through grants to Catholic education organizations.

Teaching the children their Catholic faith formed the heart of the message Mary gave to Sr. Adele Brise when the Blessed Mother appeared in an apparition to the young Belgian immigrant girl in October of 1859.

“It was the Blessed Mother who got Tom and I together for this walk,” said Deprey, who has visited Marian apparition sites in Lourdes, Fatima and Medjugorje. Deprey said he hopes participants come away from the walk with a renewed desire to support Sr. Adele’s effort to build a strong Catholic foundation in children “to help the children make a difference in the world.”

“This pilgrimage is much like life’s journey,” Deprey said. “It’s not going to be easy for those who participate. There will be a number of obstacles for every step they take. It symbolizes life in general and the help we’ll need from the Blessed Mother to get through it.”

For more information about the Walk to Mary visit www.walktomary.com.