Books bring her closer to kids

That was 14 years ago. Her granddaughter is now a sophomore at Northeast Wisconsin Technical College, and the other grandkids have also moved beyond first grade. 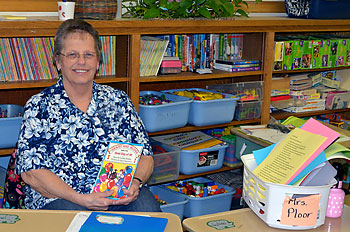 “I enjoyed it so, I just kept going through the years,” Ploor said.

Back in the beginning, she and husband Dan had just given up dairy farming. Their 45 cows, a “small operation,” she said, had nevertheless supported their family, but it became too labor intensive as the couple grew older and their seven children left home. So, they sold the cows, bought Holstein steers — and Ploor found herself with a less crowded schedule. Reading Buddy came at just the right time. The Ploors retired from farming entirely in 2005.

The Reading Buddy program at St. John Bosco is one hour every Thursday morning. It begins with the students reading a book to their buddy, and then the buddy reads one to them. After that, they work together on a craft project.

Ploor said she finds things a bit different from when she raised her own kids.

“Kids have everything today,” she said. “Being brought up on a farm, we did what we could for them, but they didn’t have the computers, iPods, cell phones and what not.”

It’s interesting, she said, to discover who her children will be each year. Reading levels vary, and so does their interest in books or crafts. But they all like the nearly one-on-one attention they get, and are eager to share about the things they’ve done, the places they’ve gone, the birthday parties they’re anticipating. The room is full of chatter on Reading Buddy day.

“This year, my two really listen to the stories, and they look closely at the pictures and point out fun details,” Ploor said.

The crafts are something Ploor herself didn’t get into until her own kids were grown because life on a farm meant little spare time. Now that she’s discovered crafts, however, she helps her teacher-daughter find things the students might enjoy. Sometimes, along with friend and fellow Reading Buddy Nancy Writt, Ploor returns to the classroom for special projects where the teacher needs helping hands.

“Sometimes I bring treats for the teachers, because baking is a passion of mine,” Ploor said. “Last week, I made them a cheesecake.”

Still, it’s the first graders who bring Ploor back to the classroom year after year. When she and her husband had some health problems, her little students prayed for her. She in turn prays for all of them, and watches them as they get older and perform in band or choir concerts, sports games, or receive the sacraments. She remembers all of them, at least by first name. She mentored three more of her grandchildren as a Reading Buddy, but now that they’re all older, she’s content to spend time with other people’s kids and grandkids.

“It’s a simple thing to do if you like kids, and you like to see them grow in their reading skills. It’s amazing to see the changes that nine months bring. It’s rewarding to know that I might have helped them enjoy reading a little more.”

Ploor hangs her students’ Christmas and Easter cards and Valentine cards on her refrigerator, just like she once did for her own children. It makes her feel younger, she said, and she has no intention of giving up this favorite volunteer job.

“I’ll be back every year until I can’t do it anymore.”