“It’s going to be sad to see him go,” said Matthews, the son of Dan and Lori Matthews. “He’s my brother.” 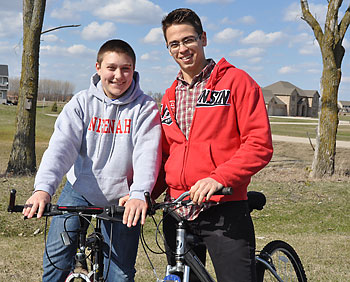 Matthews, 17, who has two older brothers in their 20s, admits that he was initially apprehensive about hosting a student from another country.

“The first day was kind of scary,” he said. “I really didn’t talk to him that much. My mom thought it would be good to make him feel welcome so we started playing video games. Slowly, we became really close and now he’s just part of the family.”

Fr. Larry Seidl, pastor at St. Gabriel the Archangel Parish in Neenah, has served as spiritual director for the program since 2007. He explained that Global Outreach receives approximately 45 applications each year.

“We are able to take between 20 and 25 depending on the number of host families we find and the number of partner schools,” he said. “We look for five qualities in our students: have a strong faith, we expect them to be active practicing Catholics; be proficient in English; display good leadership skills; personal maturity; and be of good health.”

Fr. Seidl and Barbara Tota-Boryczka, Global Outreach director, travel to Europe each February to interview prospective students. A summer camp is held in July where the incoming students gather with alumni, including the most recent exchange students, and a group from the United States. Matthews will be making this year’s trip.

“I’m excited to see all the different countries and I do get to spend four days in Marcell’s city with him,” he said. “That’s going to be really cool to meet his family and see the stuff that he talks about.”

“The whole structure of the summer camp experience is mentoring the new students,” said Fr. Seidl. “We also have younger students from Europe who attend the camp. They may have some future interest so they get a bit of a feel for what the program is like.”

Daniel Kriegl, campus minister at Notre Dame Academy, will serve as the program director of the summer camp. The American group will travel throughout Europe the week prior and week after the camp in Slovakia. They will stay in the homes of Global Outreach alumni.

Global Outreach is now in its 23rd year. The faith element and individual attention to both the students and host families set the program apart, said Fr. Seidl. In August, the exchange students take part in orientation at Mount Tabor Center in Menasha. A TEC (Teens Encounter Christ) weekend is among the highlights during their nine-month stay. Fr. Seidl and Tota-Boryczka make school visits during October and November, even those in Nebraska. A midyear gathering of all the students is also on the calendar.

Support for the host families includes a home visit and an orientation in June.

“We also emphasize to the students and the families that we are always available for any needs there might be,” said Fr. Seidl. “We would like to get new schools involved in the program, but we don’t want to become a large program. We feel that we could not offer the kind of quality that we offer now, the personal contact. We could have a few more students, but I would not want to go up to 50.”

Columbus High School in Marshfield has recently joined the program as a partner school due in part to a meeting with Bishop William Callahan of the La Crosse Diocese. Bishop David Ricken wrote an introductory letter to Bishop Callahan on behalf of Global Outreach. The major need is new host families, said Fr. Seidl.

“This is a stressful time of year,” he said. “Barbara and I are busy finding the host families. In the areas farther away, we rely on the people there to provide us help. The students pay a program fee and their transportation costs. They are required to have health insurance and parents send monthly spending money. We also want the student to be involved. We feel it’s a way to pay back the school for their involvement. Many of our families report that they’ve been enriched by this experience.”

“I could finally have a brother who was closer to my age,” said Ben. “Marcell has a brother who is 10, an eight-year difference. We watch movies and have gone bowling a couple times. That was a lot of fun. He’s awesome and his English is spectacular. I don’t think that Father could have found a better fit for our family.”

In addition to fitting in the household, Marcell has also developed a close relationship with Marie Wockenfus, Ben’s grandmother.

“(Marcell) did football at school,” said Ben. “He had never played before. He’s also now a big Packer fan. A lot of that influence came from Grandma.”

Ben is trying to learn to speak some Hungarian before the summer trip. He doesn’t hesitate when asked to name an acquired taste that Marcell picked up in the U.S.

“Mountain Dew, he loves Mountain Dew,” said Ben with a laugh. “It’s not in Hungary. You can find it other places in Europe, but it’s really hard to get.”

Three families from St. Gabriel hosted students this past year.

“The people in the parish have been supportive of my involvement in the program,” said Fr. Seidl. “They were at St. Matthew (Allouez) and now here at St. Gabriel. I hope to do this as long as God grants me the good health and stamina. As a priest, this has been a fantastic opportunity. I feel so enriched by this.”

Ben encourages other families to consider hosting a student.

“It was more natural than I thought it would be,” he said. “I’ve met a lot of the kids from the program and they are all great. They all have really good senses of humor. I highly recommend the program to anyone.”

For more information about Global Outreach, go to www.globaloutreach program.com.