Kieltyka added, that looking back, numerous faith experiences set the foundation for the call. It began with Renew 2000. 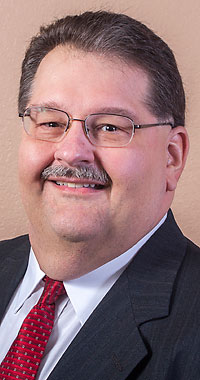 “We started getting together in a group with the Shahas and Gauthiers in 1999,” he explained. “Jim then helped me get in touch with a personal relationship with Jesus Christ through a couple programs — Life in the Spirit and Cursillo. He continued to mentor me. Cursillo is a great support group where you meet a lot of people and it just blossomed from there. The Holy Spirit kind of took over. I wrestled with it for a year and a half, but then said ‘yes.’ I’m trying to be obedient to the Holy Spirit.”

Kieltyka was born and raised on the south side of Chicago where his family belonged to St. Michael the Archangel Parish. His father died when he was young. During his sophomore year of high school, he moved to Green Bay with his mother to be close to his brother Roger’s family.

“The first grandchild was on the way,” he said. “It was a good move. It was a different style of life in Green Bay compared to the inner-city Chicago neighborhood.”

Following graduation from Green Bay East High School in 1979, Kieltyka attended Northeast Wisconsin Technical College to study auto mechanics and data processing. He worked in both fields and currently is employed in information technology at Humana.

He and Ann, who manages St. Catherine Book and Gift Shop, Green Bay, were married at St. Philip the Apostle Church, her home parish, in 1986. They settled on the west side of Green Bay and became members of St. Elizabeth Ann Seton.

“We were there (St. Elizabeth Ann Seton) for 24 years before moving over to Cathedral two years ago in 2011,” said Keiltyka. “We were very involved at the parish. I was an extraordinary minister of holy Communion, a lector and a part of the social justice/dignity of life committee. I led that for a number of years. Ann and I served as a baptism prep couple. Msgr. (Jim) Dillenburg (former pastor at St. Elizabeth) was another mentor.”

Kieltyka will serve as a deacon at St. Francis Xavier Cathedral and St. John the Evangelist parishes in Green Bay, where he will assist Fr. John Girotti, pastor, and Deacon Tom Mahoney. He embraces the opportunity to serve.

“I’m truly humbled,” he said. “The deacon is there for the word, liturgy and charity. I will be proclaiming the word, be a part of the liturgy and do works of charity.”

Kieltyka has led confirmation preparation at the cathedral for the past two years. He has been very involved in youth ministry with his eldest son, Nathan, who recently completed his freshman year at Northern Michigan University. The couple’s other son, Jordan, completed his sophomore year at Notre Dame Academy in Green Bay.

“I chaperoned three trips to Steubenville and St. Paul,” he said. “Nathan was going through the youth group at Nativity (of Our Lord Parish, Ashwaubenon). I enjoy working with young people. There is also the other side. At St. Elizabeth, I was involved with ministry to the elderly at a nursing home.”

Preaching as a deacon can take many forms. Kieltyka is comfortable talking about the faith in different settings.

“There are some opportunities that may not be homilies, but are still talks,” he said. “I just gave one at a Life in the Spirit, a 25-minute talk about salvation. I view that as a way to preach.

“I am also ministering at the workplace,” he added. “You take an ordained person and put them in the secular world and I am proclaiming the Gospel there through my actions and words.”

Kieltyka’s first Mass as a deacon following the ordination will be on the afternoon of May 18. The intention of the Mass will be for his parents, Louis and Frances.

“It will be my thanksgiving to them,” he said. “That will be a cool celebration. The Holy Spirit had that planned. At the cathedral, the (Mass intentions) fill up pretty quickly. That date happened to be open.”

In preparation for the day, Kieltyka has been writing thank you letters to those who have supported him on the journey, including his spiritual director, Norbertine Fr. Alfred McBride.

“I had some great mentors,” he said. “I’m just so thankful. Many people prayed for me. I couldn’t be here without those prayers.”