Drop in Mass attendance a concern to diocese

Over the past 10 years, on average, Mass attendance within the diocese has dropped by a little less than 3 percent each year, according to annual Mass counts. These surveys are taken at all parishes on two weekends near the end of October. The average parish decrease for 10 years is 21 percent, and although 24 parishes have increased in Mass attendance, 133 have decreased. 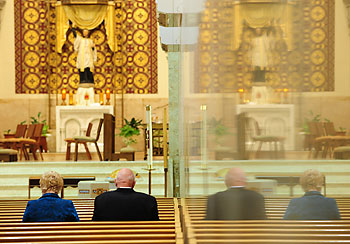 A couple attends Mass at St. Francis Xavier Cathedral in Green Bay. According to annual Mass counts taken in the Green Bay Diocese, attendance at weekend Masses has dropped over the past 10 years by around 21 percent. (Sam Lucero | The Compass)

Mogilka said these statistics have brought concern to Bishop David Ricken, but he is committed to addressing this issue and, as part of the implementation of his pastoral letter, “Parishes: Called to be Holy, Fully Engaged, Fully Alive,” he has asked that a high priority be placed on Mass attendance.

“The first issue with regard to Mass attendance is that we have to acknowledge that maintaining the status quo will not work,” said Mogilka, a national speaker, workshop presenter and writer on topics such as pastoral planning and parish life. “I affirm Bishop Ricken for making increased Mass attendance a priority in the diocese.”

It is no secret that Mass attendance has been declining, not just in northeastern Wisconsin, but across the country. Yet, according to Mogilka, the drop is far less significant in comparison to other mainline denominations, largely due to the Hispanic population. Research shows that 68 percent of those coming to the U.S. from Mexico are Catholic, he said.

Although the Midwest has a higher percentage of Catholics that attend Mass on a weekly basis in comparison to other regions, numbers here have also dropped. Within the Midwest and Northeast regions, there has been a 10-20 percent decline in the percentages of Catholics between the years 2000 and 2010. “It’s a bigger problem than just in the Diocese of Green Bay,” Mogilka said.

Research studies have shown that there are a variety of reasons that people are not attending Mass. According to Mogilka, one of the top reasons is that 78 percent of Catholics believe they can be good Catholics without going to Mass. Other reasons include family responsibilities, health issues or disabilities, work conflicts or they “just don’t have time.”

“We also have to look at the difference between attending Mass and the issue of membership,” Mogilka said. There are many different groups of Mass attenders, including those who attend Mass, contribute financially and are fully engaged in parish life through committees, service, and more; those who attend Mass and contribute but do not participate in other areas; and those who are registered members at the parish but attend Mass just a few times a year. The diocese would like to see an increase not only in Mass attendance, but in membership engagement as well.

Although some initiatives, like Catholics Come Home, have helped increase Mass attendance by small amounts or for short time periods, church leaders continue to research ideas that will sustain these increases and keep people coming back.

Mogilka mentioned three factors that draw people to Mass. The first one is a welcoming community.

“Part of that is the experience of the living God in a community of people,” Mogilka said. The second one is preaching that is uplifting and positive and connects Scripture to daily life. Mogilka mentioned that one of the best homilists he ever heard was a priest who picked a few random churchgoers at Mass every weekend and asked them to write some notes about his homily and leave them at the back of church, unsigned. The third factor is quality of music.

In addition to these factors, Mogilka mentioned five ideas to increase Mass attendance.

• First, the church needs to acknowledge the diversity of the Catholic community. “People will go where their spiritual needs are met,” Mogilka said. “Some prefer more traditional Latin liturgical experiences, while others prefer upbeat, high energy liturgy.”

Mogilka pointed out a national study that said that 30 percent of those who are Mass attendants on a given weekend are not from the immediate geographic area of the parish. The report showed that 42 percent of Hispanics will travel beyond the closest parish to attend Mass that is more culturally sensitive.

One real opportunity for growth in Mass attendance at this time is to continue the development of outreach and ministry to and with Hispanics, Mogilka said. While looking at the data from the October Mass counts, he specifically looked at the Spanish-speaking Masses. “Over the last seven years that we have studied these, there has been an increase at those of an average of 6.6 percent.”

• Third, the church needs to increase its efforts of catechesis on the Eucharist. “If a larger percentage of Catholics realized that this is the body and blood of Jesus Christ, then why wouldn’t they want to experience that on a daily basis?” Mogilka said.

• Fourth, the church needs a complete community commitment to engaging and welcoming youth and young adults. Mogilka said that one of the biggest challenges ahead for diocesan leaders and parishes is to foster increased levels of Mass attendance in those aged 35 and younger.

“Youth ministers and youth groups alone are not enough,” Mogilka said. “The entire community needs to help with this effort, and we need to minister to the family as a whole, the parents as well as youth.”

• Lastly, Mogilka mentioned an Australian study that revealed the introduction of Sunday evening Masses showed an overall increase in Mass attendance, especially among young adults, newcomers and “switchers,” those who switched from another church.

Backus is communications coordinator for the Diocese of Green Bay.