Taking his listeners from the question to the answer they already believed was a challenging ride through physics, formulae and funny stories. The idea was to show them that there is a response to the “new atheism,” that people don’t need to view science and faith as adversaries, and that Catholics don’t need to be intimidated by those who claim faith is merely a giant leap in the dark. Our young people, he said, need to be shown why this is true. 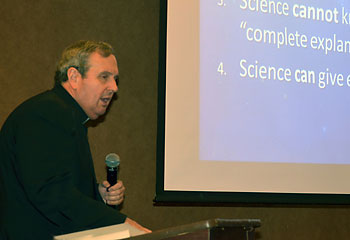 Jesuit Fr. Robert Spitzer leads a discussion on science and faith during the diocesan Leadership Day April 25 at the Rock Garden in Green Bay. (Monica Sawyn | For The Compass)

However, Fr. Spitzer said, this complete misconception of faith and science is one of the major blocks to faith as experienced by young people “who are significantly evangelized by our secular culture.”

“It begins in the seventh grade, heightens in the ninth when they begin critical studies and scientific studies, and by the time they get to universities, they are being directly confronted by a series of challenges that we have to prepare them for, or we will create an entire generation who are not only temporally impoverished, but also spiritually impoverished, because they’re going to think God doesn’t make any sense.”

That has already happened in Europe, where 54 percent of the people consider themselves non-believers — those who don’t believe anything about transcendence. Fr. Spitzer said that the numbers of 17- to 30-year-old unbelievers in Europe has doubled in the last five years and is expected to double again in the next five years. America is rapidly moving toward that statistic, especially among young people, he said.

However, he said, when young people are presented with evidence for the existence of God, they are absolutely stupefied that it (the evidence) exists, and that they never heard of it.

The Catholic Church’s position on evolution and science is extremely open, Fr. Spitzer said. In fact, it was a Belgian priest, Fr. Georges Lemaitre, who developed the “Big Bang theory,” although, for various reasons, he didn’t get credit for it, according to Fr. Spitzer. It was Pope Pius XII who said we don’t have to reconcile the Bible with science, “because the Bible isn’t doing science.” Instead, Fr. Spitzer said, the Bible articulates the truths necessary for salvation.

Fr. Spitzer said science can’t disprove the existence of God because it depends on observable evidence, and God transcends physical reality. No matter what theory of creation is proposed, when it is traced back to its very start, it has to come to a point where physical reality didn’t exist, where there was only nothing.

“Only nothing comes from nothing,” he said. “You can’t get something from nothing. Prior to the beginning of physical reality, it could not have moved itself from nothing to something because it was nothing and could only do nothing. The only solution is that there is a transcendent causal power outside of the universe — sounds like a divine creator, God, to me.”

Fr. Spitzer also referred to something called entropy, which is a measure of disorder in a physical system. When a system works, it loses a little of its order and can’t get it back, he said — like the pool balls that can’t come back into the V-shape of the break on their own. If a universe existed without a beginning, the law of entropy says the disorder would have grown to such a point that the universe could no longer function. It would be a dead universe.

And yet, Fr. Spitzer said, the universe is and has remained orderly, is not dead, and points to a beginning. And a beginning needs a primal cause that is outside of that universe.

“We don’t have to convince our kids (about any of this),” Fr. Spitzer said. “Just show them the evidence and ask them what they think. I think these kids will look at the evidence and say, ‘I’ve been sold a bill of goods (by the atheistic scientific world).'”

In his afternoon session, Fr. Spitzer talked about near-death experiences and how they can lead to belief in the existence of the human soul. Although many books have been written about such experiences, he said it’s important to be discriminating in what is read.

The experiences that can be trusted are those in peer-reviewed medical journals; involve studies using controls to really examine whether there could be a natural explanation for these experiences; and involve experiences that fit the clinical definition of death, which is no electrical activity in the brain.

Something other than the body connects with the physical world during these experiences. “Call it the soul,” Fr. Spitzer said.

That soul is conscious of its own self, has memories that are intact, can “see” and “hear” things going on, even in rooms adjacent to where the body is.

Fr. Spitzer said resources for working with young people in all these areas abound on the Magis Center of Reason and Faith website, www.magis reasonfaith.org.