For Panske, love (of neighbor) is a rose

“It was one thing I was good at,” Panske said. He cashed in his retirement account to open a business and now has owned The Garden Gate floral shop in Oshkosh for 25 years. 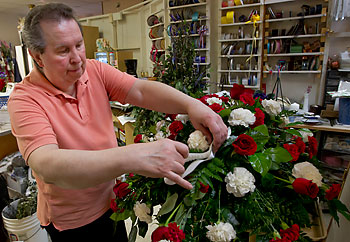 But it’s not just a business for Panske. It’s also an expression of his faith and a way to share that with the world. He donates his services and flowers for a variety of occasions.

He doesn’t charge for funeral flowers for infants.

“People have enough on their plates at that time without adding more to their financial situation,” he said.

Anybody who turns 100 years old gets 100 long-stemmed red roses from Panske — and a comparable number of red roses on each subsequent birthday.

“Anybody who lives 100 years in the world as it stands today deserves 100 roses,” Panske says.

“I love to see the reactions when the flowers are delivered,” Panske said. “A lot of them just burst into tears.”

He recalls a delivery made to one woman on a Friday, and she died the following Sunday.

One gentleman died the day before his 100th birthday, so Panske sent the roses for his funeral.

Another woman, Viola, lived to be 111 years old and was always “flabbergasted” to receive her yearly arrangement from Panske.

“She’d say, ‘Tony, save your money,’ and I’d tell her, ‘I can’t take it with me,'” Panske said. He got close enough to Viola that, when she died, Panske arranged her casket spray and he attended the funeral.

“She had a nice funeral,” he said.

Panske also offers discounts to the Sisters of the Sorrowful Mother retirement community in Oshkosh, does holiday arrangements for the Community of Our Lady Monastery, helps decorate the churches and donates floral wreaths for veteran organizations’ ceremonies on Memorial Day.

“I feel that business people have an obligation to give back to their community, and this is my small way of doing that,” Panske said. “I can’t tell you how many thank-you notes I’ve gotten from people. I don’t know if it ever comes back financially (through new business), but I think it’s a nice way to give back to the community.”

And that’s really the point for Panske. He said that he and his siblings were raised by their mother, Doris, to care for others.

“We all went to Catholic schools and attended St. Vincent Parish,” Panske said. “She took care of us kids. She babysat for 25 years and we have quite an extended family. She was always there when somebody needed something.”

He said an elderly brother and sister lived across the street from them for many years, and when the brother died, Panske’s mother went to go and sit with the sister even though a grandchild was due to be born that day.

“It was always foremost in my mind what Mother taught us,” he said. “We have an obligation as God’s children to take care of each other. Mom just raised us that way. I never knew any other way of behaving.”

He added that his younger sister, Angie McCarthy, heads up the Day by Day Warming Shelter in Oshkosh.

“It’s kind of a family thing to give,” he said.

He finds that his service gives to everyone all the way around.

“Flowers help give people a boost,” he said. “The looks on their faces when they receive them are worth a million dollars.”

Personally, he enjoys doing flowers for all occasions and to support the parishes.

“Not to sound selfish or anything,” he said, “but I think it’s for your own good. It’s helping us strive toward hopefully going to heaven one day.”