To bridge that middle ground, Thorsen turned to her brother, John, a seminarian with the Diocese of Green Bay. 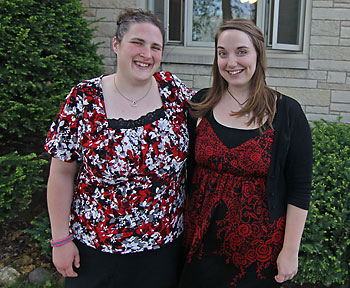 Jenny Kampa, left, and Corrie Christiaansen are co-founders of St. Maria Goretti House in Appleton. “We are an intentional community for women 21 or older who are Catholic and desire the community life and to be holy,” explained Christiaansen. (Steve Wideman | For The Compass)

“I asked if he knew of a women’s community and he said he did,” Thorsen said.

Through connections gained as a staffer with Catholic Youth Expeditions, John turned his sister to a little-known women’s house in Appleton — the St. Maria Goretti House.

“I live in a world that is very secular, but when I come home there is a lot of conversation about our Catholic faith and how it applies to how we are living,” Thorsen said. “There is a comfort level living there. It is home.”

Goretti House is in its second year of operation bringing women from different secular careers together to grow in and enjoy the Catholic faith, said co-founder Corrie Christiaansen.

“A lot of times when men think of being holy they think of priests, nuns or sisters. As single women of God we want to live out our faith as best we can,” Christiaansen said.

Thoughts of establishing a women’s house began when Christiaansen was ending an intern position on the staff of CYE.

“I was praying (about) where I would live after being on the CYE staff,” Christiaansen said.

The pair were soon exploring ways to live together and open a women’s house.

They found out the Sacred Heart rectory was empty and church officials were looking for a use for it.

“We are an intentional community for women 21 or older who are Catholic and desire the community life and to be holy,” Christiaansen said.

Goretti House fills a niche for some women, Christiaansen said.

“The women living here were looking for some place to live and be surrounded by a good Catholic community,” she said.

On May 19, the five women living at Goretti House hosted a combination Pentecost Sunday party and a birthday party for one of the women with more than a dozen friends and supporters of Goretti House in attendance.

The watchwords at Goretti House are hospitality, joy and chastity, Christiaansen said.

Goretti House is not a house of discernment for women religious, but could be a first step toward the religious life, Christiaansen said.

“We are open to God’s will for our lives,” she said.

Fr. Jewel Aytona, who worked with Christiaansen in youth ministries at the Shrine of Our Lady of Good Help, attended Sunday’s Pentecost party with his brother, Fr. Joseph Aytona. Both priests are members of the Fathers of Mercy religious order.

Fr. Jewel said it’s important for Christian women to live in community with other Christians who have the same goals.

“The Christian life does entail living in community,” Fr. Jewel said. “I’m sure Goretti House gives the women living there an opportunity to prepare for a vocation, whatever that vocation is,” he said.

Christiaansen said the name St. Maria Goretti House originated from a relic she possessed of the 19th-century saint.

“I wanted to give the relic to a seminarian I knew, so I started researching St. Maria Goretti,” she said.

She discovered St. Maria Goretti of Italy was 11 when a farmhand stabbed her 14 times when she refused his sexual advances and said she would rather die.

“She was so young when she died a virgin martyr. She lived simply, but with so much joy. We find her life so beautiful and virtuous. She’s a great role model for us in so many ways,” Christiaansen said.