“Whatever was left, was given to us and it was our responsibility to sell them,” said Hogan in a 2010 interview marking the 50-year anniversary of the game. “It wasn’t bad at first with Lombardi and the team’s success, but as the years went on, the season ticket holders didn’t buy them like they used to. We had to push the level of sales up.” 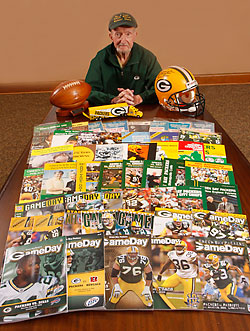 Jim Hogan is pictured in 2010 with Green Bay Packer game day programs from the annual Bishop’s Charities Game. (File Photo by Rick Evans | For The Compass)

Hogan led a committee that designated 14 regions for tickets sales. The diocese received one-third of the ticket money. Hogan also was responsible for producing the game program and earning revenue from advertising sales. He humbly passed the credit on to the numerous volunteers.

“The chairpersons and their people did the work,” he said. “I can remember having a photo taken on the field with all the (chairpersons) and some of the volunteers at one of the games before the Packers took over the ticket sales again. That was a great day.”

Hogan served on many boards and committees including the Board of Education for Premontre High School and as alumni president for both Premontre and St. Norbert College. He and Joan, his wife of nearly 57 years, served as chairpersons of the Abbot Pennings Parents Club. Hogan was also a member of the Knights of Columbus, Holy Name Society, Our Lady of Charity and Sacred Heart Seminary Guild. He also enjoyed working for the Spalding Endowment Golf Outing.

Hogan received several honors, including multiple awards from both Premonte High School and St. Norbert College. In 1979, the college presented him the Distinguished Achievement Award in Humanities.

Among his personal interests was music. Hogan assisted the jazz band at Abbot Pennings High School when a drummer was needed.

The funeral Mass was celebrated on May 7 at Resurrection Church, Allouez. Bishop Robert Morneau officiated and Norbertine Fr. Jim Baraniak served as the homilist.