The statue blessing was held during the 8:30 a.m. Mass at the shrine chapel. Among those attending were the statue’s creators, Gianfranco Tassara and his son Gino, from Inspired Artisans in Milwaukee. 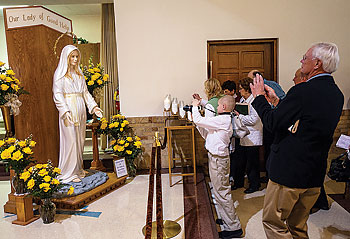 Guests attending the April 27 Mass and blessing of the official statue of Our Lady of Good Help take turns capturing photos of the new statue, which stands about 5 feet 8 inches tall. (Sam Lucero | The Compass)

During his homily, Bishop Ricken read a passage from Adele Brise’s testimony about the third and final apparition, which was recorded by Sr. Pauline LaPlante, one of Adele’s companions.

“As they approached the hallowed spot, Adele could see the beautiful lady, clothed in dazzling white, with a yellow sash around her waist,” said Bishop Ricken. “Her dress fell to her feet in graceful folds. She had a crown of stars around her head, and her long, golden, wavy hair fell loosely around her shoulders. Such a heavenly light shone around her that Adele could hardly look back at her sweet face. Overcome by this heavenly light and the beauty of her amiable visitor, Adele fell on her knees.

“‘In God’s name, who are you and what do you want of me?’ asked Adele. … ‘I am the Queen of Heaven, who prays for the conversion of sinners, and I wish you to do the same,” said Bishop Ricken, quoting the passage recorded by Sr. Pauline.

“These are the words that Fr. (John) Doerfler and I gave to the wonderful artisan and craftsman who sculpted this beautiful statue,” said Bishop Ricken.

“Gianfranco from Milwaukee is here and he and his son have worked intimately with this statue for many months,” added Bishop Ricken. “They … have worked with great love and devotion and out of a spirit of prayer to capture this description of Adele as perfectly as possible, which was our instructions to him.”

Bishop Ricken said that a generous donor, who chooses to remain anonymous, paid for the creation of the new statue. “We are grateful to the donor and also to Gianfranco and his company for being very careful about the execution of this particular beautiful concept in word, passed on from the experience of Adele to us.”

Since 1859, hundreds of thousands of people have come to the shrine, said Bishop Ricken, “and walked into the embrace of love and the open mantel of our Blessed Mother, asking her to assist them in all of their needs.”

He said that “countless miracles and answered prayers” have happened at the shrine since his Dec. 8, 2010, proclamation declaring the apparitions as worthy of belief. “(Mary) has touched many hearts and won many souls for her son,” said Bishop Ricken. “And for that we are very grateful because she is still the greatest evangelizer of all times.”

Following the bishop’s homily, Fr. John Doerfler, vicar general and chancellor for the Diocese of Green Bay, and Father of Mercy Peter Stryker, rector of the shrine, unveiled the statue. Bishop Ricken, assisted by Deacon Manny Torres, recited a prayer of dedication and then blessed the statue.

At the conclusion of Mass, many of the faithful stayed to view the new statue up close and take photographs. Amid the sound of camera shutters, Gianfranco Tassara told The Compass that his work on the official statue of Our Lady of Good Help was a special honor.

“This is one of a kind,” he said. “Think about it. The only apparition approved in the United States and we are in the work of doing religious art. So for us, this is a great, great honor.”

Tassara, a native of Peru, who began his liturgical art studio in Milwaukee in 1997, said he read about the approved Marian apparitions and contacted Fr. Doerfler “asking to see if there was a possibility to do some work on this project.”

When Fr. Doerfler and Bishop Ricken contacted him, they told Tassara the artwork needed to “follow the description of Adele as much as possible,” he said.

“Originally, it was going in between two trees because there was the maple and the hemlock (between which the Blessed Mother appeared to Brise),” said Tassara. “In the end, it turned out very good, where there are just the leaves at the bottom of the base.”

Tassara said the statue’s colors are what make it special. “I think the luminosity of the colors … is what made the statue.” It took 16 months to complete the project, beginning with pencil drawings, a clay model and the final fiberglass creation, he added.

In addition to the statue (which rests on a wooden stand inside the chapel sanctuary), Tassara was commissioned to create 12-inch replicas.

In an interview, Bishop Ricken said he believes Tassara captured the essence of the apparition of the Blessed Mother as described by Adele Brise. “I’m very pleased,” he said. “I think everybody is.”