“I am deeply humbled that so many of you participated in this choir over the 40-year period,” Bishop Ricken wrote in a tribute letter to the choir as they prepared to celebrate one last Mass together on April 14 at St. John the Evangelist Church. 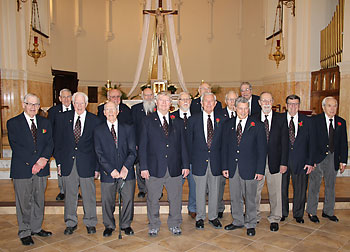 Members of the Green Bay Boys Choir gather for a photo near the sanctuary of St. John the Evangelist Church in Green Bay on April 14. (Submitted Photo | For The Compass)

“How wonderful that so many senior members of the Catholic Church continued to sing at the Masses throughout the years. The sounds of hymns coming from the choir certainly brought much joy to each Mass,” wrote Bishop Ricken.

It was 1972 and Green Bay stockbroker Bob Gallagher organized about 50 middle-aged men under the name “The St. John’s Boys Choir” to sing at the 5 p.m. Mass at St. John the Evangelist Church in downtown Green Bay. Accompanied by organ or piano, they punctuated songs like “Just a Closer Walk with Thee” and “God Bless America” with the sounds of cymbals and drums to add both interest and drama to their singing.

“We’re a group of good guys who came together to sing, but mostly it was about the fellowship. The choir became the way to cement our friendships,” said Ron DeLain. A former city clerk of Green Bay, DeLain led the choir as its director for its last 19 years.

After 40 years together, the “boys” — now mostly in their 70s and 80s — formally retired in 2012. At first, they only sang at St. John’s, but their popularity grew and eventually took the group to no less than 10 surrounding counties for performances at Masses, weddings, funerals, anniversaries and Christmas programs. Reflecting their new-found growth, they changed their name to “The Original Green Bay Boys Choir.” They sang at veterans homes, nursing homes and the Shrine of Our Lady of Good Help.

In the early days, Bob Gallagher, the first director, would rent a school bus for out-of-town transport and contract with the prisoners at the Green Bay Correctional Institute to create bus signs and banners. With the blessing of the warden, Gallagher paid them in cigarettes, as was the custom in those days.

At the April 14 Mass, 40 or so men arrived, each dressed in a blue blazer with a red rose in his lapel. They sat together in the front rows of church, sang the last hymn “Let There Be Peace on Earth,” and watched the dedication of a commemorative plaque telling their story of service. The plaque will hang in the parish hall. With friends and family, they gathered after Mass for lunch and friendship.

“You know, I had an affinity for choirs when I joined the group in 1993 or 1994. I met my wife one day when I was singing in the Cathedral Choir, so I thought it might be fun to join this group,” said Norb Kalinoski, who served as choir director for about a year and was a high school principal during much of his working career. He heard of the choir when it formed in 1972, but had just accepted a job in Shiocton. When he returned to Green Bay years later, one of his first plans was to join the choir.

“The driving force of the group was social,” he said. “We were not the world’s greatest singers by the way, but we got by. When you sing, you are happy.”

Liturgical and classical musician Lester Bleser, Jr., joined the choir as accompanist (organ and piano) about 20 years ago.

“The choir did the music I enjoyed,” he recalled. The group’s only female member (an organist) was moving to another parish, so there was an opening. Bleser joined in a heartbeat.

Choir members came from all walks of life. There were educators and social workers, doctors and lawyers and judges, public officials and business owners. At one time, the local sheriff — Norb Froelich — served as organist.

“It didn’t matter what you did,” said Jim Falk, the choir’s final president and a member for 40 years. “We came together for a common purpose and shared a love of God, church and family.”

A native of Green Bay, Anne Gallagher is the daughter of Boys Choir founder Bob Gallagher.