“It’s already a blessed church,” he said. “This is the dedication of the renewed site and the new altar that has been commissioned for the church. The bishop will celebrate the liturgy with us.” 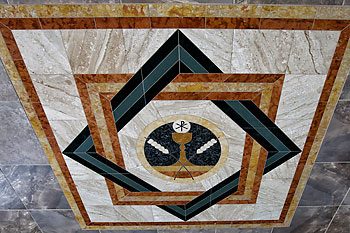 The renovation of Most Blessed Sacrament-St. Mary site on Merritt Avenue in Oshkosh includes a tiled medallion on the floor. (Jeannette Merten | For The Compass)

The current altar is made of white speckled marble that doesn’t really fit in with the furnishings of the church, Donovan explained. “We felt it was time to update it to match the décor of the church and its arched, Gothic look.”

The old altar still will be used for Sunday morning services that day because the new one will not be used until it is blessed by the bishop, Donovan said.

Features in the stand were modeled after the stand of a pieta sculpture located in the basement area of the St. Mary site, but there were multiple revisions throughout the process, Donovan noted. The colors include browns, beiges and golds to match the walls and other features in the upstairs church.

Also featured on June 2 will be a display case of small items discovered during the course of the renovation, including rosaries, coins and prayer cards.

One of the more interesting items found already has been returned to its owner. A woman had lost a Communion prayer book in 1954, about two weeks after her first Communion. She knew right where the prayer book had slipped away from her and asked that the workers look for it as their work progressed. The book was found and given back to her.

“She was very surprised that it was found,” Donovan said.

The major church renovations were debuted last October and include new flooring to replace asbestos tiles, more comfortable pews, a new heating system, a new baptismal platform at the front of the church, and a refurbished original Barton organ.

Reaction to the renovated church has been very positive, Donovan said.