So about two years ago, Burazin put together the Most Blessed Sacrament Time and Talent Band to perform at nursing homes. Although the players vary from performance to performance, they include: Burazin on trumpet, Don Derozier on tenor sax, Mark Hable on drums, Bob Hoffman on alto sax, Lori Hoppa on clarinet, Kathy Ludwig on flute, Mary Morelli on baritone horn, Marshall Potter on piano, Jerry Robak on drums and George Weyers on rhythm guitar. 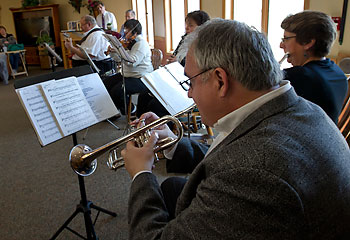 Mark Burazin, seen playing the trumpet, and other musicians that form the Most Blessed Sacrament Parish Time and Talent Band perform for residents at Oakwood Manor in Oshkosh on April 28. (Jeannette Merten | For The Compass)

“I very much enjoy songs from the Great American Songbook, if you will,” Burazin says. “I thought there was an opportunity to have a band playing tunes that folks in nursing homes would recognize — songs from the ’30s and ’40s, jazz and Dixieland. A lot of the band members like polkas and waltzes, so we try to have a balance.”

Burazin says the band focuses on recognizable songs from the 1910s through the 1960s, things the older listeners can sing along to. They play 10 to 15 songs within a one-hour performance time.

“We try to get to a nursing home in the Oshkosh area every month,” Burazin says. “I’m trying to keep the performances to once a month. We start in nursing homes and are open to playing parish picnics and other activities, but I haven’t been actively trying to book us. I’m trying to make this not a big time consumption on the band members while still doing outreach for the parish.”

Burazin says he enjoys visiting nursing homes, and the residents are always very happy to have them there.

“To me, it speaks directly to the attitude of visiting the sick,” he says. “Many of the folks we see have Alzheimer’s or early stages of dementia. It’s a really good experience to be playing music and seeing people rolled in in a wheelchair. Then the music starts up and a look of recognition comes onto their faces, and they start to sing along and tap their feet. It’s a good feeling.”

He says their listeners often hear a song that they associate with a memorable day in their lives or things they heard when they were in a happy time.

“Typically, we’ll play something that will remind them of something in their life, and they’ll share that experience with us,” he says. “They remember that incident because we showed up and played. They have a big glow on the face.”

Burazin says their performances are shown throughout the nursing homes on closed-circuit television, and it’s a very popular program among the residents.

“We find out many guests have been listening to it in their rooms, and they fill up the room we’re in,” he says. “They’re very happy, and many come up afterwards and thank us for visiting. They’re appreciative of having us there. Everybody’s there for a different reason. Many of them are very lucid and strike up some fascinating conversations after the shows. It’s enjoyable.”

Burazin has found his own outreach in music since he started with Drum and Bugle Corps when he was just “7 years old and three feet tall.”

“I’ve always liked music. Some of my earliest memories are of my dad playing different records. Looking back at all the movies I’ve enjoyed over the years, it was always about the music for me,” he says. “I like to think every piece of music we pick for the band has a little piece of heaven in it. We pick positive songs. There is enough negativity out there that it doesn’t hurt to present an hour of positive lyrics.”

He sees the band and its performances in two ways. One is as an outreach of the parish and letting people know that Most Blessed Sacrament Parish is there for them.

“We care about them and care enough to take time out of our day and share an hour with them,” Burazin says. “That’s a big part of it.”

The other big part of it, for Burazin, is using his abilities for a greater good.

“It’s simple,” he says. “It’s not my talent, it’s God-given. If you’re not sharing it with people, you’re just being selfish about it. I am fulfilling the prompting of the Holy Spirit. I very much enjoy playing music, but the prompting of the Holy Spirit is to put it out there for people who wouldn’t hear music otherwise, visit them and let them know that they’re loved and that we care about them.”

Burazin said that he is naturally shy. “In my faith journey, I keep getting pushed by the Holy Spirit into doing more and more of these types of things. I’ve learned to accept the fact that if I’m uncomfortable with something, I’m probably going in the right direction,” he explains. “My favorite words to live by are ‘Pray, hope and don’t worry,’ by Blessed Mother Teresa. That’s what I try to live by.”