Rath died May 16, 1918, while working near the top of the steeple of the almost-completed St. Nicholas Church in Freedom. 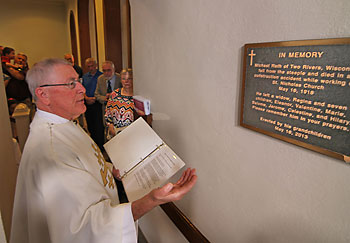 Msgr. Jim VandenHogen blesses a plaque presented to St. Nicholas Church in Freedom by the grandchildren of Michael Rath, a Two Rivers bricklayer killed when the steeple collapsed under high winds while under construction in 1918. (By Steve Wideman | For The Compass)

According to local newspaper accounts at the time, a severe spring storm packing high winds rolled over Freedom about 3 p.m. that day.

The winds ripped apart arched steel trusses atop the steeple, collapsing scaffolding on which Rath stood, sending the veteran church builder plummeting down the shaft of the steeple.

The steeple itself fell, crashing into the church and burying Rath under a mountain of debris where his body remained hidden for several hours.

Parishioners had laid the cornerstone to their new church barely a month before, on April 14, 1918, according to news accounts.

Rath’s death is memorialized on a bronze plaque donated by his grandchildren to St. Nicholas.

“As a group we wanted to do something in his memory. We’ve talked about my grandfather’s death for years at family reunions,” said John Rath of Appleton, who spearheaded efforts by a group of first cousins to raise money to buy the plaque.

John Rath was among 16 descendants of Michael Rath who gathered May 15 at St. Nicholas, one day before the 95th anniversary of the accident that also injured several other workers.

Msgr. Jim VandenHogen blessed the plaque, which is mounted in a hallway on a wall supporting the existing steeple and bell tower. 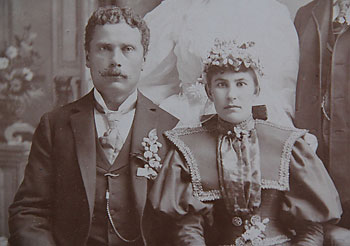 Michael and Regina Rath on their wedding day. Ninety-five years after his death, a plaque was blessed May 15 in Michael Rath’s honor. (By Steve Wideman | For The Compass)

“Michael gave his life building this beautiful house of God, St. Nicholas Church,” Msgr. VandenHogen said during the blessing. “May Michael, who sacrificed his life doing what he loved best, rest from his labor of love in the dwelling place of God.”

Msgr. VandenHogen noted Michael Rath’s family, including his wife, Regina, and seven children suffered greatly because of his death.

“We don’t know how grandma did it, but she kept the house and raised all their children,” John Rath said.

Rath said his grandfather was a second-generation mason contractor noted in Manitowoc and Sheboygan counties for his bricklaying skills and for working to construct many well-known buildings, including the existing Two Rivers city hall in 1905, St. Luke School in 1909 and several churches.

In 1910, he did the brick work on Ss. Cyril and Methodius Church in Sheboygan.

“Any time he could work on a Catholic church or school, he would bid on that project,” said John Rath, who noted his grandfather’s professional hallmark is still impressed in some cement sidewalks in the Two Rivers area.

Phil Rath of Clintonville, who worked for years as a shipbuilder in Manitowoc, said he can understand the dangers his grandfather faced 95 years ago.

“I appreciate what happened back in 1918. In the shipyards we worked on scaffolding all our work lives. They were two planks wide, which is roughly 20 inches. Objects falling on scaffolding can cause it to buckle and collapse,” Phil Rath said. “It’s a critical time because you’ve got people up in the air. There are a lot of things that can go wrong, a lot of opportunities for things to go wrong.”

On May 16, 1918, everything went wrong for the St. Nicholas construction workers.

“We can only surmise that he was doing what he loved best, building God’s house,” John Rath said.

Rath said his grandfather’s legacy lives on through the long list of descendants, which include Catholic priests, deacons, lectors, cantors, pastoral council members and others involved in the church.

He said fund-raising efforts for the bronze plaque resulted in a $460 surplus. Those extra funds were used to buy a new Nativity scene for St. Nicholas.