“Exciting and scary at the same time is a good way to describe it,” said Beck. “My mindset is to prepare the best I can and roll with the punches.”

Beck expects to be serving in a rural village most likely without running water and electricity. She will be teaching secondary education English, math, biology or physical science. English is spoken in Malawi, but villagers also speak Chichewa, a tribal language which Beck hopes to learn. She will spend time in training before being sworn in as a Peace Corps volunteer in August.

Beck’s interest in intercultural experiences grew from her international studies classes at St. Norbert. She also spent a semester abroad in France. 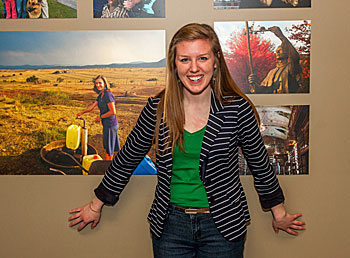 Kaylee Beck of De Pere, a 2013 graduate of St. Norbert College, will serve a 27-month term in the Peace Corps. Beck will teach secondary education in Malawi in southeast Africa. Her desire to serve was inspired by her international studies classes and internship at the Norman Miller Peace and Justice Center on campus. (Rick Evans | For The Compass)

“The program that I did was a French immersion program,” she explained. “I didn’t take many classes in English. The point was to develop my skills. I really felt that I may end up in French-speaking Africa.”

Exploration of the Peace Corps began in the fall of her junior year when she took the “Introduction to Peace and Justice” class. She followed up by attending a program offered by Jeremy Doughty, a 2005 St. Norbert graduate who served the Peace Corps in the Ukraine.

“I got this idea stirring around in my head,” said Beck, who competed in cross country and track and field for the Green Knights. “I was really considering it as a post-grad option. I really wanted more intercultural experience. I started the Peace Corps application process last July.”

Beck was contacted by a recruiter. She interviewed in Chicago in November and was nominated for service in January. She is one of three recent St. Norbert graduates who will be Peace Corps volunteers.

Beck also credits her senior year internship at the Norman Miller Peace and Justice Center on campus for fostering her passion for service.

“(Internships) give opportunity to explore some issues,” said Dr. Bob Pyne, who directs the peace and justice center. “One of the things we really try to do is to provide an atmosphere and environment for conversation and exploration about important issues, especially those that affect things like human rights. The education of women, the rights and opportunities for marginalized people have been a big focus for Kaylee. She has worked on the connection between girls’ education and maternal health and mortality. She’s done some important work in that area that I think is going to fuel her work in education in Malawi.”

Pyne will visit her in Malawi. He hopes to take a couple St. Norbert students along so that they “catch that same vision and contribute to how they can be a part of change in the big world.” He has confidence that Beck will adapt well to her new surroundings.

“The Peace Corps is a difficult assignment,” he said, “but one thing we’ve all seen in working with Kaylee is that she is unflappable. She is dedicated, sets goals and nails them every time. She works really hard. She’s going to need that kind of perseverance with the Peace Corps, especially initially when they kind of drop you off and you have to settle in. It’s a difficult adjustment, but once somebody gets on the other side of that, they begin to really contribute to the community.”

Following her 27-month Peace Corps term, Beck will enroll in a graduate school program. She also plans to remain open to other intercultural opportunities.

“I had a really good experience abroad and knew I wanted more,” she said. “I think (the Peace Corps) is just what I need. I’m ready for it.”

“This is not a selfish generation,” said Pyne. “They care and they want to do something about it. Kaylee is dedicated to serving the common good and contributing to people, especially those on the margins.”