Funds for the “Innovative Educator Grant” were supplied by shareholders of the Wisconsin Public Service Foundation. The award recognizes teachers who have an experiential vision of learning and who have a plan to integrate science, technology, math and engineering in their lesson designs. 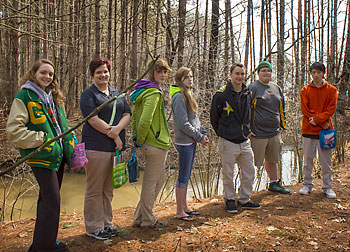 Science and biology teacher Sotka’s vision and enthusiasm for implementing the water research project across the curriculum and grade levels was captured in a grant application prepared by STAA business manager Linda Hornick.

With a forte for grant writing, Hornick recognizes the values and opportunities such programs as those sponsored by WPS provide to the teachers and students of STAA. In preparing the grant, besides outlining a budget and timeline, she incorporated lesson plans, educational strategies and a list of equipment needed for the project prepared by Sotka. Although this is the first year the award was received by Sotka and her class, Hornick said WPS “has been a long-time supporter of schools.”

Once STAA received the WPS grant, the test kits were ordered. Upon receiving them, Sotka and her students quickly became familiar with their operations. In late April, when winter released its icy hold on the surrounding waterways, testing began.

The environmental science class, an upper level class, will be the leaders of this project. They’ll be collecting data each fall and spring. Seventh grade life science, eighth grade earth science and 10th grade biology classes will also be taking part in the ongoing study. “The project will become more interesting as we compare trends over time,” Sotka said.

The conductivity test, which measures the speed of electricity traveling through water, was done by Chang. “Pollution in the water can speed up or slow down this rate,” he said. “For example, metals in the water would conduct electricity better.”

Sorensen took the temperature readings. “The temperature must be in the correct range for many species to survive,” she said. “Temperature also relates to dissolved oxygen because colder water can retain more oxygen.”

In the turbidity test, Kielcheski checked the water for suspended particles. “Normally you’d place a white and black plate on a string, lower it into the water and check for transparency. With the new kits, we’re able to get a more accurate reading electronically,” he said.

“Knowing the dissolved oxygen level is important because it signifies the health of the water,” added Chilcote. With this information, researchers can better understand the health of the fish and other living creatures.

As the project develops, the plan includes reporting data as citizen scientists, doing comparative analysis of data over time and integrating with other subject areas within the school’s curriculum. Seefeldt, who was tasked with recording data for her class, recognized the importance of getting a good baseline for future classes. “Inaccurate notes reflect poorly on those performing the tests, provide false information and could lead to further difficulties down the road,” she said.

Allison Myers summed up her classmates’ shared view of the project when she said, “It’s great to get outdoors and try something tangible and exciting.”