Wavrunek’s call to the diaconate grew out of prayer

Wavrunek will serve as a deacon at St. Isidore the Farmer Parish, Tisch Mills, and St. Therese de Lisieux Parish, Stangelville/Pilsen. He grew up on a farm on Hwy. 29 in the Pilsen area. His ministry experience traces back to when he became a lector in 1969 at age 16. Fr. John Johanek invited him to a meeting for new lectors where he was joined by five older men. 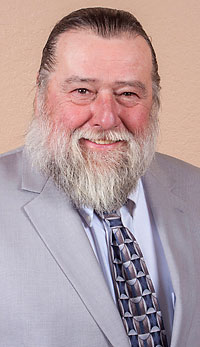 Wavrunek married his wife, Christal, in 1975. They joined St. Isidore the Farmer and have been members ever since. Fr. Joseph Lutheran, the pastor in Tisch Mills, was friends with Fr. Johanek, so word got out about Bob’s service as a lector.

“I’ve been doing it for 38 years here,” he said. “Fr. Lutheran was originally from New York, but made his way to the Green Bay Diocese. He baptized our kids and was a good friend.”

The Wavrunek home features Fr. Lutheran’s organ and a clock made by the priest.

Fr. Ralph Hermsen recruited Bob to teach religion at the parish. He has concentrated on 10th grade faith formation. Christal teaches confirmation. The call to the diaconate grew out of Bob’s prayer life.

“It was always in the back of my mind,” he said. “When I’m doing field work, I pray the rosary. I prayed one day to God, ‘Can you give me a sign?’ That night when I slept, Fr. Hermsen appeared in a dream. He was in the sanctuary of the church here and I was in the sacristy. I knew it was him from his laugh. We talked. None of those other words stayed with me except ‘deacon.’ I remembered that when I woke up in the morning.”

Christal accompanied Bob to formation classes. Last year, she graduated from the Emmaus Lay Ministry Formation Program. She continued to take classes with Bob this year, including homiletics. The couple teams up for ministry at the Kewaunee Care Center.

“We do Communion services there on Sundays,” said Bob. “They are like family. Last week, this one lady in her 90s from the Luxemburg area was in her bed. She used to come out with a walker. Now she’s in a wheelchair. I brought her Communion in the room. She told me, ‘I’m scared.’ I said, ‘You just received Jesus. God is all around you. God loves you.’ She said, ‘I love you.’ The rewards are there without question.”

A man at the center never came out of his room for the Eucharist until Bob invited him. Now the man, who is paralyzed, is a regular.

“A lady from Minnesota, some kind of relation of his, was visiting on Christmas day,” explained Bob. “(The man) was an atheist and pretty much had no faith. She said, ‘We were praying that faith would come to him.’

“The biggest thing is to live (the faith),” he added. “People see that. Bring it to them. For some people it just takes a little push.”

The ministry has grown through invites to others to participate. Bob and Christal, a guitarist who provides the music, purchased a van to help transport the volunteers. They also bring consecrated hosts to the homes of two elderly women. The ministry will continue for Bob as a deacon.

He is open to serving wherever Fr. Dennis Drury, pastor, and Deacon Robert Pribek, who is on staff at the parishes, need assistance. On ordination weekend, Bob will preach for the first time at Tisch Mills, at two Masses in Stangelville and in Pilsen.

“I was baptized there in Pilsen, so it’s kind of like going home,” he said. “I am the first deacon from the parish (Tisch Mills) to be ordained. There have been priests, but no deacons.”

The couple, active members of the Rural Life Committee for the diocese, operates a 228-acre farm in Zander. They also rent 56 acres of farm land. Chickens, peacocks, milk cows and steers are joined on the farm by special animals linked to Jesus. According to legend, the Sicilian donkeys have a cross marking on their backs because Jesus once rode one of the miniature breeds. The animals and nature on the farm serve as a reminder of God’s presence, said Bob.

“With the animals, it’s life and death,” he said. “You count on God for the crops to grow. In 1988, we had a drought. You can be mad. Some people take it out on God because something doesn’t go right. There’s always a reason why things happen. We need to trust in God.”