A guide to parish leadership titles

Pastor: A priest who shepherds or leads the parish entrusted to him, exercising pastoral care in the community entrusted to him under the authority of the diocesan bishop. The pastor carries out the duties of teaching, sanctifying and governing, with the cooperation of other priests or deacons and the assistance of lay members of the Christian faithful. 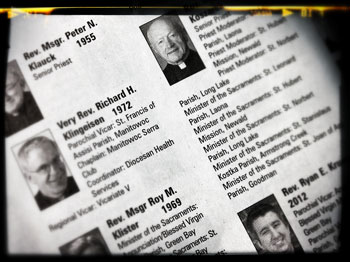 A review of the Diocese of Green Bay Directory reflects the variety of titles given to parish leadership.

Administrator: A priest who is bound by the same duties as a pastor. Often, an administrator is either appointed for a shorter period of time (perhaps during a time of transition), or is appointed as administrator until such a time as the bishop may name the administrator as pastor (especially for a more recently ordained priest). A priest “on loan” from a religious order may also be named administrator instead of pastor.

Pastoral leader: The person appointed by the bishop to participate in the exercise of pastoral care of a parish when there is not a priest available to serve as pastor or administrator. The pastoral leader, formerly called “parish director,” may be a deacon, religious sister or brother, or a lay woman or man who has a master’s degree in theology or pastoral studies, and at least five years of pastoral experience, among other qualifications.

Only a deacon can preach a homily at Mass. If the pastoral leader is not ordained, he or she may give a reflection before Mass as a “call to worship.”

Priest moderator: The priest who is endowed with the power and faculties of a pastor to supervise the pastoral care in a parish served by a pastoral leader. He is asked to be present to meet with the Parish Pastoral Council and finance council once a year, to review the annual parish report and budget, and to celebrate Mass on two weekends over the course of a year.

Priest celebrant: A priest, formerly called “sacramental minister,” who is appointed to celebrate the sacraments in a parish led by a pastoral leader.

Pastoral coordinator: A deacon who serves in a role similar to that of a pastoral leader, but under the direction of a priest administrator.

Parochial vicar: A newly ordained priest assigned to a parish with a pastor, usually for two to four years before receiving a pastorship of his own.

Senior priest: A priest who has retired but may still be called upon to celebrate Mass or help with the sacraments.

Fr. Tom Long, vicar for ministers in the Green Bay Diocese, said the projection shows that the diocese will continue to lose a few priests for the next three years, but that in 2017 “we’ll start gaining.”

In 2012, he said, the diocese had 157 parishes, with Mass celebrated each Sunday in 180 churches. There were 77 pastors or administrators, 11 parochial vicars and 19 pastoral leaders. Of the priests, 19 are from religious orders (not ordained specifically for this diocese) and nine are “on loan” from other countries. These numbers don’t include the senior priests, many of whom help out in one or more parishes every Sunday.

Summer is a transition time for seminaries, with the numbers entering or remaining in formation still unknown until fall. This past school year, Fr. Long said, the Green Bay diocese had 27 seminarians. Two were ordained June 1 and two are scheduled to be ordained next year. However, this year 11 priests retired and one died.

In addition, one pastoral leader resigned, and two more are expected to resign for health reasons.