Fr. Hagendorf was to celebrate 50-year jubilee on June 6

DE PERE — On Wednesday, May 15, Norbertine Fr. Jim Baraniak, prior at St. Norbert Abbey, met Norbertine Fr. Tom Hagendorf for lunch. During their conversation at The Mustard Seed, one of Fr. Hagendorf’s favorite restaurants, the pastor at Holy Cross Parish, Bay Settlement, told Fr. Baraniak, “I want to be one of those guys who dies with his boots on.” Three days later, he did just that. Fr. Hagendorf, 75, died at his desk on May 18.

In 1955, Fr. Hagendorf, a Philadelphia native, entered the Norbertine novitiate of Daylesford Priory in Paoli, Pa. He professed simple vows in 1957 and solemn vows in 1960 at St. Norbert Abbey, De Pere. He was ordained to the priesthood by Bishop John Grellinger on Aug. 29, 1963, at St. Norbert Abbey. Fr. Hagendorf would have celebrated his 50-year jubilee of ordination with the community on the feast of St. Norbert, June 6.

In a videotaped interview, he explained that there was “no alternative” to becoming a Norbertine. If he could not have joined the order, he would not have become a priest. 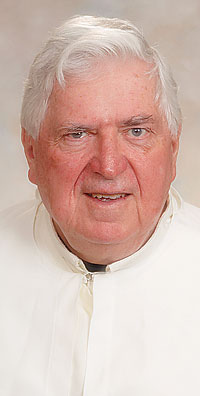 Following ordination, Fr. Hagendorf, who earned a degree in philosophy from St. Norbert College and a master’s degree in library science from the University of Wisconsin in Madison, served as librarian and a member of the theology department at Archmere Academy, the Norbertine high school in Wilmington, Del. He also served as the superior of Immaculate Conception Priory connected to the school.

In 2000, Fr. Hagendorf moved back to St. Norbert Abbey. He served as associate pastor at St. Jude and Annunciation parishes in Green Bay and Our Lady of Lourdes Parish, De Pere. In August of 2003, he was appointed pastor at Holy Cross. Fr. Hagendorf shared his love for the parish, said Fr. Baraniak.

“He went on and on and on,” said Fr. Baraniak. “I wanted to pinch him to see if he was real because of all the beautiful things he had to say about (Holy Cross).”

Fr. Hagendorf had hoped to serve the parish for five more years and then move on to ministry at St. Norbert College. According to Fr. Baraniak, he wanted to become a “scooter priest” on campus. He also mentioned that Fr. Hagendorf fittingly died with an iPad pen in his hand because in many ways he was “ever ancient, ever new.”

The funeral Mass was held on May 23 at St. Norbert Abbey. Norbertine Abbot Gary Neville was the celebrant.

Birthday cards from Holy Cross School students surrounded the casket during the visitation prior to the funeral Mass. Fr. Hagendorf died two days prior to his 76th birthday. Fr. Hagendorf’s passion for education is being honored through the establishment of a tuition assistance fund that will benefit a Holy Cross student in need. To contribute to “The Reverend Thomas A. Hagendorf Memorial Scholarship Fund,” send donations payable to “Holy Cross” (write Fr. Thomas Hagendorf Memorial Fund in the memo line) to: Memorial Scholarship Fund, Holy Cross Parish, 3009 Bay Settlement Rd., Green Bay, WI 54311.