APPLETON — It all started with kneelers.

When the present church for the community of St. Thomas More was dedicated in 1989, it was built without kneelers — which was liturgically correct at that time. Since then, with many changes in the Mass and in liturgical emphases, including the new edition of the Roman Missal in 2011, Bishop David Ricken has asked that all parishes in the diocese have kneelers. 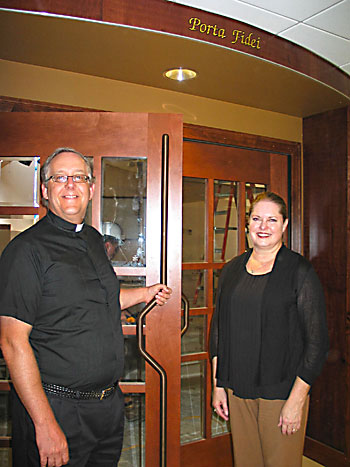 Fr. Jim Lucas, pastor of St. Thomas More Parish, and parishioner Joan Kula next to the new “door of faith,” part of the church’s $2 million renovation. (Patricia Kasten | The Compass)

The question for St. Thomas More was: Just add kneelers — which probably would entail moving pews and a total cost of $21,000 — or do something more substantial for their 24-year-old church?

The pastoral council, in June 2011, decided, “Let’s try to do something we can be proud of, versus the minimum of putting the kneelers in,” explained Fr. Jim Lucas, who has been pastor of the community since September 2010.

The result is a completely renovated church and gathering area, along with updated heating and air conditioning, additional restrooms, accessibility upgrades that include a hearing loop system in the church and enhancements that include a digital organ with 16 speakers, a new choir area, new outdoor signage, landscaping around the building and a carillon on the roof.

What ended up being a nearly $2 million project also coincides with the parish’s 50th anniversary, which will be marked on Sept. 14 with a 5 p.m. Mass in the renovated church, celebrated by Bishop Robert Morneau. A dinner that evening and refreshments after the Sunday Masses will cap a year of events. These included a jubilee prayer used at Masses throughout this year, a birthday party with cupcakes on Sept. 4 and a parish mission held in fall of 2012. Led by Norbertine Fr. Tim Shillcox, the mission had the theme: “The Eucharist. The Main Event.”

“The parish mission started us off in a very spiritual way,” Fr. Lucas explained. “The theme was meant to continue to hold in front of us the centrality of the Eucharist as participation.”

The Eucharist became the theme around which all the renovations have taken place, since the first change was when the tabernacle — which came from the original “gym church” that was dedicated in 1966 — was moved from a separate chapel and placed behind the altar in the present church.

Today, the tabernacle has been refinished, replated in gold and placed behind the new altar — which was made to include pieces of marble from the old gym altar. The tabernacle sits in a special place that opens both to the church and to a small prayer chapel behind.

‘Eucharist is heartbeat of our community’

As Fr. Lucas explained to a group of parish ministers, gathered for a preview on Sept. 7, about the tabernacle’s new place: “The Eucharist is the spiritual heartbeat of our community.”

The sanctuary has new altar furniture and tile flooring. A shrine with a statue of St. Thomas More will flank one side of it. A crucifix — with a corpus carved by local artist Dan Van Berkel of Darboy — hangs above the tabernacle. New LED lighting, capable of dramatic stage lighting, has been added.

The refinished pews have returned, with their added kneelers. The Stations of the Cross — original to the gym church — will have wall niches and lighting. There will even be a welcoming center that doubles as a security entrance for the school (now part of St. Francis Xavier Catholic School system) that will allow the church to be open all day.

The first thing returning parish members and guests notice will probably be the new baptismal font. The old font from 1989 had outlived its functionality and could not be repaired, so a new font was another top priority.

“I continue to be amazed that — once we grappled for a long time (about) what that font would look like — (how) it’s packed with Christian symbolism,” said Fr. Lucas.

The font has an upper font for infant baptism, but also has a pool into which adults can walk down for immersion baptism. The font holds the Easter candle, the holy oils and has flowing water. A tall, bronze “alpha and omega” symbol for Christ faces the entry. The construction on the font alone took two months.

Fr. Lucas feels this font will symbolize the energy of the faith community: “From that font and from our baptism — it’s like dropping a petal into the water — from the font, the energy went out to every other place.”

Both Fr. Lucas, and Fr. Gerald Falk, pastor emeritus, cited the parish’s energy in living out their baptism and the Eucharist

“Liturgy — Eucharist — is the basis of our community,” said Fr. Falk, who led the parish for 40 years and who still continues to handle pastoral care to the sick and homebound. When asked what the hallmark of the parish is, he replied, “I think it would be the working together of the many gifts of the people within the community itself. And, also, that doesn’t stay within the (parish) community. They get out to St. Vincent de Paul, the Salvation Army, LEAVEN (a Fox Valley emergency assistance program) and St. Joe’s food pantry.”

Parish members also assist in the diocesan mission in the Dominican Republic, in Haiti and send assistance to St. Anthony Parish in Neopit.

“So you can see that they go out from the Eucharist, doing what they have been commissioned by the Lord to do,” said Sr. Mary Rose Menting, a School Sister of St. Francis, who has served the parish for 36 years.

“One of the things I’m impressed with,” she added, “is the participation of people at the liturgy — the response to the prayers and the singing. They participate so well in the liturgy. They are able to do that because we have worship aids to help them do that.”

Those worship aids, often hand-decorated by Sr. Mary Rose are produced with the input of the parish’s worship committee and the help of pastoral associate Sr. Betty Reinders, another School Sister of St. Francis, who has also served there for 36 years. Sr. Betty believes that the parish’s liturgical emphasis has always included “a concentration on welcoming and hospitality.”

“I know how a lot of emphasis (here) has been put on good liturgy,” she said. “Not only for weekend liturgies, but also for funerals.  We want to have people participate as much as possible. This renovation can be looked at with that insight as well.”

Enhancing the worship experience and promoting a sense of welcome were the groundwork for renovation. Joan Kula, who heads the worship space enhancement committee and is vice chair of the worship committee, said that a mix of parish members became involved.

“We’ve had a great gathering of all the STM people, all types and backgrounds and lengths of being parishioners,” Kula said. “They’ve all come together and worked together. We don’t always agree, but we’ve come to decisions together.” 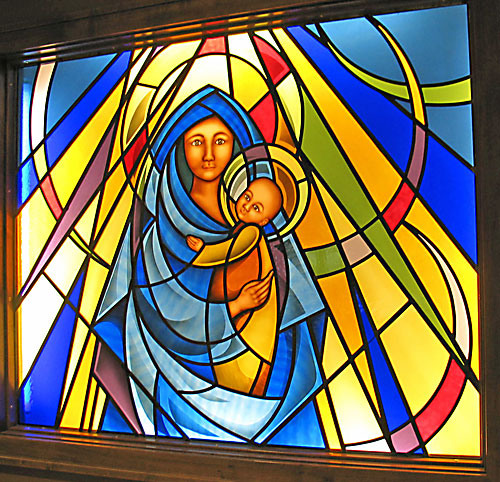 This Mary and Jesus stained glass window was originally in the eucharistic chapel at St. Thomas More Church. It was removed, since the tabernacle is now in the sanctuary. It now graces the family area. (Patricia Kasten | The Compass)

As the renovations progressed, the goal became to enhance what had already been done 24 years ago when the church was built.

“Throughout this whole process, we have been cognizant of past contributions made by members and we wanted to celebrate what they’ve done and to enhance what we’ve already been given by them,” said Maria Totzke, also of the enhancement committee.

“I am just so encouraged and happy to see the parish come together behind this and support this project,” added Totzke, who served on the advanced giving committee.

Fundraising for the renovations, under the theme of 50 MORE!, began last fall. By late August, $1.5 million in cash had been raised with another $400,000 pledged. The campaign also had a forward-looking emphasis and included investment in the parish’s scholarship fund, youth ministry and the parish endowment, as well as in a contingency fund for unforeseen expenses.

Pat and Helen Hart, charter members of the parish, served as co-chairs with Dave and Kim O’Brien on the 50 MORE! Campaign. The Harts noted that, of the 1,300 registered members, “440 families have formally signed on and are making up the three-year pledges.” They added that many members — with backgrounds in engineering, interior decorating and religious interior backgrounds came forward to help save costs.

“People make up the congregation — their concerns and well-being have always come first,” said Hart. “Through the past 50 years, St. Thomas More (Parish) has been a leading faith-filled community.”

The Harts joined about 200 other parish members on Aug. 4 for evening prayer and a preview of the work in the church and a signing of its cement floor before the tiles were laid. From a 3-year-old’s scribbles to the carefully written Bible verses of 80-somethings, parish members placed their names and prayers into the sanctuary of their church.

The parish was founded on Sept. 12, 1963, as the seventh parish in Appleton. It was a daughter parish of St. Therese and its first pastor, Fr. Patrick McMahon, lived at St. Therese’s rectory until the long-time rectory on Glendale Avenue (where Fr. Falk, the parish’s second pastor, still lives) could be purchased.

The parish facility was built on 12 acres in what was known as Randall’s Woods. As many of the trees were saved as possible when the combination gym church-school and convent (since demolished) was built in 1965 and dedicated on Jan. 16, 1966. At the time, it was the first parish in the diocese to include air-conditioning in its entire facility — even in the gym church, which was again pressed into temporary service during the present renovations.

Until the parish buildings were finished in 1965, Sunday Masses were celebrated at the now-demolished Rainbow Gardens dance hall on Wisconsin Avenue and weekday Masses were offered in the rectory.

Today, weekday Masses will be held in the new gathering area which is flanked by a stained-glass window of the Blessed Mother and Child that had been in the now-removed eucharistic chapel. About 45-50 people regularly attend the 7 a.m. Mass with Sr. Betty and Sr. Mary Rose leading the morning office before the Mass.