Five ways pope has made his mark

Last week marked the six-month anniversary of Pope Francis’ election as supreme pontiff. As illustrated by Joe Heller’s cartoon , it’s been a wild ride for the church and for the Jesuit cardinal from Argentina. 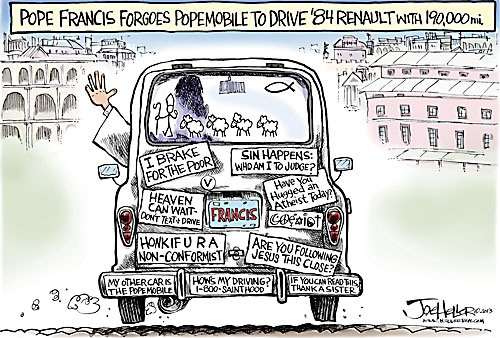 From the get-go, Pope Francis has amazed and impressed us with his unpredictability, simple lifestyle and capacity to boldly proclaim the Gospel in word and deed.

“You can see that he’s a man with a vision, he’s a man who has plans for the church,” Msgr. John Kennedy, an official at the Congregation for the Doctrine of the Faith, told Vatican Radio. “He’s showing the best of the church in many ways.”

So in what ways has Pope Francis demonstrated the best of the church? Here is my top-five list.

The cold call pope: One thing we’ve learned about Pope Francis is that he likes to reach out and touch people by telephone.

One such call took place two weeks ago. On the other end was Anna Romano, an Italian woman who confided, in a letter to Pope Francis, that she had become pregnant by her boyfriend, who suggested she have an abortion. When he called her on her cell phone, Romano said that she was “petrified.”

“I recognized his voice and I knew right away that it really was the pope,” she told the Rome daily newspaper, Il Messaggero. “(He) reassured me, telling me that the baby was a gift from God, a sign of providence. He told me I would not be left alone.”

The photogenic pope: On Aug. 28, Pope Francis met with young people from the Italian Diocese of Piacenza-Bobbio. After his address, he visited with them and had his photo taken with three teens, selfie style. Selfies are self-posed photos usually taken with smartphones. The photo of Pope Francis and three grinning young Italians made the rounds on Twitter and other social media sites.

The anti-war pope: After Syria used chemical weapons on its citizens Aug. 21, President Barack Obama called for military strikes to punish Syrian President Bashar Assad. Pope Francis, while condemning the loss of life in the chemical attacks, said that escalating the violence was wrong. “Never has the use of violence brought peace in its wake,” he said. “War begets war, violence begets violence.”

Pope Francis led a day of fasting and prayer for peace in Syria on Sept. 7. He invited Christians, non-Christians and “all men of good will” to participate in the day of prayer. By word and example, he helped to defuse a potentially catastrophic situation.

The pope of the poor: Nearly every day for the past six months, Pope Francis has reminded us that love for the poor is a Christian obligation, not an option. He then shows us the way. While in Brazil during World Youth Day, Pope Francis visited one of the country’s poorest slums. He denounced a “culture of selfishness and individualism” and then walked through the streets greeting people. He even spent 15 minutes inside one house, visiting with more than 20 family members.

The reform pope: One reason Pope Francis was elected by the College of Cardinals was to lead a reform of the Vatican’s bureaucracy. He named a group of eight cardinals to serve as advisors in leading a reform of the Roman Curia. The group of cardinals, known as the Group of Eight, includes Boston Cardinal Sean O’Malley. Vatican reforms will take time to implement, but with Pope Francis at the helm, who doubts that changes will take place?

Do you have examples describing ways Pope Francis has demonstrated the best of the church? If so, send them to us as a letter to the editor.