One of the most memorable and symbolic images I’ve seen of Jesus Christ was a statue outside Christ the King Church in San Diego. I captured an image of that statue while working at the Southern Cross diocesan newspaper in 1986. The nearly life-size, plaster statue is not unlike other ones found at any church or Catholic cemetery — except for one glaring omission. Around 1980, vandals damaged the statue, cutting off both hands. 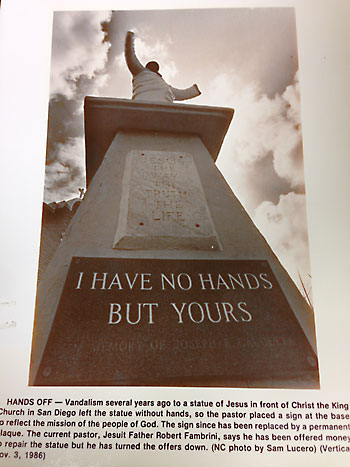 Photo from 1986 showing statue of Jesus outside of Christ the King Church in San Diego.

Rather than repair the statue, Jesuit Fr. Robert Fambrini, pastor at the time, placed a sign at the base to reflect the mission of the people of God. “I have no hands but yours.” The sign was later replaced by a permanent plaque. Fr. Fambrini told me that he received offers to pay for the statue’s repair but he turned them down.

A prayer attributed to St. Teresa of Avila uses this metaphor: “Christ has no body but yours, no hands, feet on earth but yours. … Yours are the hands with which he blesses all the world.”

Other images of Christ with outstretched arms have caught my eye over the years. The most famous, Christ the Redeemer statue, is located on a mountain high above Rio de Janeiro, Brazil. At St. Joseph Chapel, on the diocesan grounds, a small statue of Jesus with outstretched arms sits in the sanctuary. What is it about this posture that has special significance and meaning?

I believe the image of Jesus with outstretched arms should serve as a symbol for immigration reform. The gesture of Jesus with open arms offers lessons in the ways we should treat and welcome the immigrant.

For years, lawmakers have either pushed aside or remained at odds on reforming immigration laws. Their inaction has left an estimated 12 million undocumented immigrants, hoping for a reasonable pathway to citizenship, in fear of deportation, family breakups and an unknown future.

The U.S. bishops have called on Congress to make comprehensive immigration reform a priority. Among the key principles they support, according to Catholic News Service, are: a path to citizenship; keeping families together; addressing root causes of poverty that force people to leave their homeland; and enforcing “targeted, proportional and humane” measures to control borders.

Now that the federal government’s 16-day shutdown is history, it is time for lawmakers to make immigration reform a priority. The Christian community, inspired by the image of a welcoming Jesus, should express a unified voice urging passage of fair and reasonable immigration laws.

Bishop David Ricken has added his voice to immigration reform. In a homily at St. Therese Church in Appleton last September, he said the principles outlined by U.S. bishops should be supported.

“Catholics need to be courageous in presenting these principles over and over and over again because the temptation is to treat one another poorly, especially those we don’t know or who are foreigners among us. The temptation is to push them aside and treat them like dirt. Our country has never treated our immigrants that way, at least not in policy. People do want to come here and come here properly.”

Like the statue of Jesus, we are a welcoming church with arms open wide. We are called to act with justice in his name. “I have no hands but yours,” he tells us. On immigration reform, let us be his hands.