GREEN BAY — After watching “The Way,” a 2011 movie that chronicles a father’s journey by foot along Spain’s 500-mile-long El Camino de Santiago, Fr. Andrew Kurz had an idea. Why not offer a walking pilgrimage here in Wisconsin?

After months of prayer, consultation and planning, Fr. Kurz, administrator of St. Thomas the Apostle Parish in Humboldt and St. Joseph Parish in Champion, decided to map out and create his own walking pilgrimage from one Marian shrine (the Shrine of Our Lady of Good Help in Champion) to another (the Basilica of the National Shrine of Mary Help of Christians in Hubertus). It’s his hope that he can ignite a walking pilgrimage movement in this country. 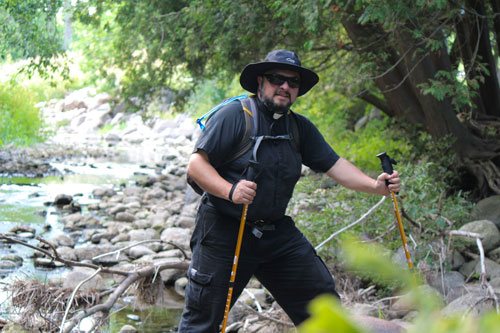 Fr. Andrew Kurz, administrator of St. Thomas the Apostle Parish in Humboldt and St. Joseph Parish in Champion, is pictured at Bruemmerville County Park near Algoma. The priest will begin a walking pilgrimage from Champion to Hubertus this Sunday. (Brian J. Sealey, NMO Media Company | Special To THE COMPASS)

Fr. Kurz will begin his walking pilgrimage this Sunday, Oct. 13, following a blessing by the Fathers of Mercy at the Champion shrine at 1 p.m. He will stop at churches and a monastery along the way to celebrate daily Mass and plans to arrive at Holy Hill at 1 p.m. Friday, Oct. 25.

The 42-year-old priest — who grew up in Wauwatosa, was ordained for the Diocese of Lincoln, Neb., and transferred to the Diocese of Green Bay in July 2012 — has been preparing for the 120-mile walk for months. He’s walked parts of the pilgrimage path, including from Pike Lake State Park to Holy Hill, a distance of eight and one-half miles, he said, and several jaunts from his parish in Humboldt to the shrine in Champion.

He’s even incorporated a walking pilgrimage into the parish’s confirmation retreats.

“The kids came on a Saturday morning and we had them watch the movie, ‘The Way,’ before setting off for Champion,” he said.

“It’s a great movie and that’s what inspired me initially to kind of say, ‘Hey, we need a Wisconsin Way,’” he said. “That’s the hope: that other people catch on to this and say this is doable. Logistically it demands a lot, but if the Holy Spirit’s behind it, it could take off. … I’ve just got to do it first and then let God do with it what he wants.”

“Pilgrimages are becoming more and more popular,” he added.

“By doing this, I’m hoping that I’m kind of blazing a trail for future (walking) pilgrimages that could be established on this general path,” said Fr. Kurz. “We’ve got these two shrines that are amazing. I grew up with Holy Hill. There’s a wall of crutches, there’s been healings there. Here, too, at Our Lady of Good Help, there’s a wall of crutches, healings and miracles. Is there any place like that in the U.S. that has two shrines where healing miracles happen? I’m pretty astounded by it.”

Through what Fr. Kurz sees as part of God’s plans, he was introduced to Brian and Rebekah Sealey of Algoma. Brian is a videographer and Rebekah is a web designer and they own NMO Media & Design. The Sealeys have established a nonprofit corporation called The American Pilgrimage Company to help promote Fr. Kurz’s idea of The Wisconsin Way and pilgrimages in the United States. They created a website, www.wisconsinpilgrim age.com, which will track Fr. Kurz’s pilgrimage journey. In addition, they have set up a Facebook page called The American Pilgrimage Co.

“We’re still forming (plans) and working with new ideas,” he said. “This has been interesting that I’ve run into these people. It all sort of comes together. It’s in God’s hands. If it’s going to take off it’s going to be because of God.”