Our response to disasters

Earlier this week, snowflakes and near single-digit temperatures arrived in our part of the world. Every year, as winter storm warnings are announced, most of us complain about the hardships we face having to bundle up our bodies or crank up our snow blowers. The fact that we have the means to own those warm coats and boots — not to mention snow blowers — escapes us, like a gust of bone-chilling wind outside the window of our warm living rooms.

In reality, most of the hardships Mother Nature brings us are mere inconveniences when compared to what our brothers and sisters around the world endure. The most recent example is the suffering and death experienced in the Philippines in the aftermath of Super Typhoon Haiyan, which struck the Pacific island nation Nov. 8. 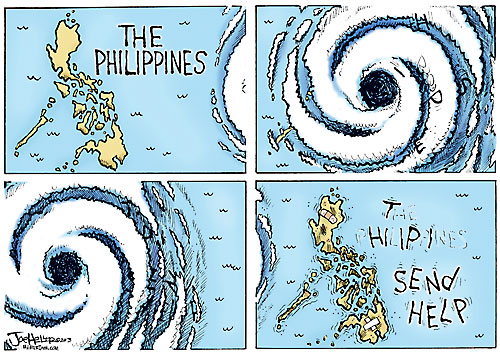 Images of the devastation caused by 200-mile-per-hour wind gusts and ocean waves some 15 feet high can only provide snapshots of the horror that residents, scattered along the eastern Philippine islands, must have suffered. The death toll has been estimated at more than 10,000. More than 630,000 people have been displaced by the storm.

Woo spoke Nov. 11 to U.S. bishops gathered in Baltimore for their annual fall general assembly. She said that the agency’s goal is to serve about 500,000 Filipinos. In addition to tarps for shelters, hygiene kits and water and sanitation supplies, CRS planned to offer a cash for work program that would pay people to help clear debris.

The Catholic Church in the United States is committed to doing all it can to provide relief to the Filipino people. Across the country, parishes will hold second collections at weekend Masses. In the Diocese of Green Bay, collections will be taken the weekend of Nov. 23 and 24. CRS is also taking online donations at http://crs.org. Donations can also be made to CRS by phone at 877-435-7277.

In addition to financial support, church leaders are encouraging Catholics to offer prayers for typhoon victims as well as the survivors. On Nov. 10, Pope Francis led thousands of people gathered at St. Peter’s Square for a moment of silent prayer.

The archbishop of Cebu, Philippines, Archbishop Jose Palma, declared a novena of prayer and charity for victims of Typhoon Haiyan. The novena began Nov. 11 and concludes Nov. 19.

“In this moment of national calamity, we turn to the Lord as we have always done for the past 400 years,” wrote Archbishop Palma in his declaration. “We turn to the Lord and cling to him and beg him to stay by the people who call on his mighty name.”

When the next flurry of snowflakes falls, let’s not complain. Let’s be grateful to God for the warmth and safety of shelters that protect us from the cold. Offering up prayers for those here and abroad, who have no shelter should be our first response. Let’s also be giving, offering financial support to Catholic Relief Services for the work they are doing in the Philippines and around the world.