DE PERE — Bus passes, backpacks, bike locks and lip balm are a few of the items on the St. John the Evangelist Homeless Shelter Christmas wish list. Donations serve important needs at the nightly emergency shelter, but another gift may be even more important, said Alexia Wood, the shelter’s executive director. 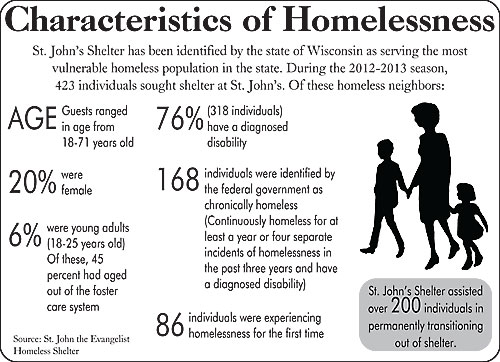 “Sit down with somebody being served by one of the shelters and ask to hear their story,” she said. “People at St. John love to be heard. If you sit down and listen to three or four stories, I guarantee you will find similarities from your own life. These conversations help us to find that common ground.”

Wood was among the panelists at a discussion of homelessness in the Green Bay area held Nov. 19 at the Norbertine Center for Spirituality at St. Norbert Abbey. The program recognized Hunger and Homeless Awareness Week, Nov. 16-24. Tony Pichler, lay ministry director for the Diocese of Green Bay, co-founder of StreetLights Outreach and a member of the board of trustees for St. John the Evangelist Homeless Shelter, served as the moderator. He said that the panel discussion provided an opportunity to share the “full story” on homelessness in the area.

Numbers of homeless in Green Bay are on the rise. According to Wood, a September report identified 493 people as homeless, including more than 200 children. The report did not include families that live in double, triple or more occupancy situations.

“We know that there is a two-bedroom apartment, near the shelter, with 23 individuals, four different families,” she said. “Kids are sleeping on dining room chairs and on the floor. Those kinds of living relationships that we would call homeless are not included.”

St. John did not open until Nov. 1, so its guests were also not counted in the report. Wood said that the shelter is serving more than 80 people per night.

Rachel Miller, a social worker with the Green Bay Area Public School District and coordinator of the McKinney-Vento Homeless Program, also served on the panel. She said that the school district currently has nearly 600 students who are homeless. For the 2012-2013 school year the district identified 1,081 homeless students, the highest total ever.

Miller added that approximately 200 of the homeless students in the district last year were also considered unaccompanied youth, meaning they didn’t have a family or any type of guardianship.

The perception of Green Bay, the third most populated city in the state, needs to change, said Wood.

“We have a small town feel so we don’t necessarily want to acknowledge some of the urban needs we are seeing,” she said. “Shelters and service providers do a good job getting people into the shelters. It’s not as prevalent on the streets as Milwaukee and Madison, so it’s a little easier for us to hope or to believe that it doesn’t exist to the extent that it does.”

Deacon Steve Meyer of St. Elizabeth Ann Seton Parish in Green Bay co-founded Streetlights Outreach with Pichler in 2004 and is also the past president of the Ecumenical Partnership on Housing. He said that he has witnessed homelessness developing into a multi-generational issue.

“When we used to see a homeless person for the first time, there was a lot of fear, a lot of trepidation. This was the worst thing they could ever imagine happening to them,” he explained. “We had to help them work through that. Now, in the past few years, we’ve encountered people who knew how to be homeless. They had been there before. In many cases they had been in and out of homelessness. They knew how to live that way. It had been normalized for them.”

The panel, which also included Calvin, a staff member and former guest at St. John the Evangelist Homeless Shelter, and a young woman named Leely, a current shelter guest, addressed the challenges associated with serving the homeless.

Wood pointed to the lack of resources, including no access for mental health services if you are homeless and no detoxification facility for those battling alcoholism. A growing challenge is young people suddenly becoming homeless, she added.

“We are seeing a lot of kids who age out of foster care and show up at our door on their 18th birthday,” she said. “They are still trying to go to high school and residing at a homeless shelter.”

“One of the biggest challenges homeless people face is they become depersonalized,” said Deacon Meyer. “There are so many people in that situation and so few resources. We are often in this mode of processing people rather than really getting to know them, spending time with them and honoring their dignity. I know a lot of really good caregivers who want to spend more time with this population, but cannot. Too often we end up just managing their situation.”

Leely spoke about her experiences staying at a shelter. She praised St. John for providing for her needs, but said that people don’t understand the difficulty of dealing with the diverse personalities of the guests and being surrounded by so many people in a concentrated space.

The panel was also asked about what faith communities can do to help the homeless. Deacon Meyer encouraged parishes to consider the Ecumenical Partnership on Housing (EPH), which includes 19 congregations and the Salvation Army. The EPH oversees the management of transitional housing for 20 families. St. Mary and St. Francis Xavier parishes, De Pere, recently joined EPH.

Panelists also took the opportunity to clear up misconceptions about the homeless. Wood spoke about the negative perception of shelter guests.

“I have learned more from these guys than I’ve learned from any textbook, classroom or relationship outside the shelter,” she said. “I’ve learned so much about love and forgiveness. This is a group that wants to contribute. They are community members. They are our constituents here in the city of Green Bay. They are misunderstood.”

Pichler dismissed the claims from opposing parties that the St. John shelter is unchristian and that it warehouses people.

“We served about 425 people last season and, of those 425 people, over 200, through the help of St. John’s and some partner organizations, were able to get more permanent housing. It’s not a warehouse. It’s not unchristian.”

Wood also provided an update about a daytime resource center for the homeless in Green Bay. She said that a location was set, but the lease was pulled the same day the contractor was scheduled to start. A new location is needed.