Advent: From waiting and watching to rejoicing

(Part I: “In the darkness of winter a light breaks forth: Jesus” by Bishop Robert Morneau.)

(Part II: “What we can learn from Christmas plants” by Deacon Jim Trzinski.)

When I was told that this Advent series was to be about light and darkness, I immediately thought of a Christmas Mass that comes to my mind every Advent. It was a really dark Christmas Mass — and yet so full of light. 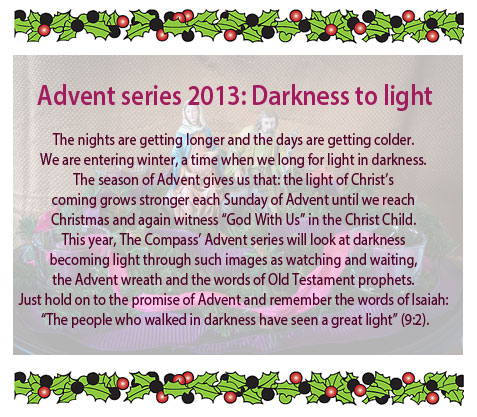 It took place in 1949, shortly after I arrived in Rome to begin my seminary studies. Early Christmas morning, I went with a few other seminarians to attend the Mass that was traditionally celebrated at a small church near the Roman Forum.

As I walked by the forum, the sun had not quite risen, so only the outline of the famous ruins could be seen. The sight of those ruins took me back 2,000 years. From that center of Rome, the imperial order had gone out which sent Joseph and Mary to Bethlehem, where Jesus would be born. And, less than 100 years later, St. Paul was in the streets around that forum with the good news of the Savior. The Lord seemed closer that morning.

The small church we entered was almost totally dark, except for the lights around the sanctuary. There were no pews, so the hundred or more people present stood around the altar. At the consecration, the celebrant lifted the host and chalice into the circle of light, and Jesus was with us. It was Christmas.

Before Communion, we American seminarians were exchanging the sign of peace with one another when I noticed a group of men standing near us. They wore red cassocks, a sign that they were seminarians from the German college. Without hesitation, we were exchanging the sign of peace. In the back of my mind, I still had faint memories of the horrors of World War II and the damage from that war could still be seen in Rome. But, with the exchange of the sign of peace, all of that was put to rest, more powerfully than any armistice. We, Germans and Americans, were brothers in Christ.

I still can visualize that Mass in my mind, sensing both the darkness and the beautiful light of the Lord’s presence. So I have no difficulty seeing Advent as a time of darkness becoming light as we prepare for the last Sunday of Advent.

The process, however, is not without effort, serious effort, both for nations striving for peace and for persons opening themselves to God’s grace. And so, as church, we focus on ways we can be more attentive during this Advent season. Bishop Robert Morneau has pointed out those ways so beautifully with his excellent article on the four W’s of Advent: Watching, Waiting, Wondering and Welcoming.

As we near Christmas, however, the letter R becomes more central. As St. Paul tells us, “Rejoice, rejoice in the Lord. The Lord is near.” This Sunday, Dec. 15, is Gaudete (Latin for “rejoice”) Sunday and we light the pink candle on the Advent wreath. As we continue to rejoice, we become more aware of what the Lord does in our lives and are more thankful. We recognize, more and more, that the Lord is the source of the light that dispels the darkness.

While we use Advent to plan and put into practice various spiritual practices that should characterize a serious Christian life, we also recognize that there can be unplanned moments of enlightenment when God’s grace seems to change our lives all by itself.

I think of that moment of God’s grace when an alcoholic man who has been ruining himself and his family suddenly decides to stop and manages to stop. Or of what happened to Dorothy Day, a young woman who had rejected Christianity and its ways, but who suddenly realized that she was wasting her life and turned to God and led a heroic life.

More simply, it can be anyone who suddenly wants to do more for the Lord and decides to become more active in helping people, or takes stewardship more seriously, or begins the practice of eucharistic adoration, or surprises himself by joining the Knights of Columbus.

Even without any major change in the way someone lives his/her life, a person just begins to look at life differently and becomes someone for whom God is real every day.

And so, in many ways, what was dark becomes light!