It was bound to happen. Ever since he took office last March, Pope Francis has been challenging us to follow the Gospel, to walk the walk, to comfort the afflicted. Now his words have afflicted the comfortable. 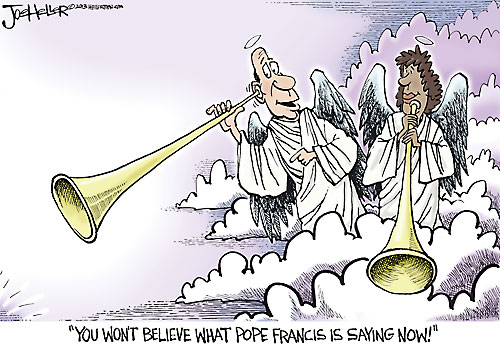 In nearly every public appearance, Pope Francis has called on all people of faith to reach out, literally, to the poor, the hungry, the elderly, the infirm. What’s more, he has shown us how.

It seems one day does not pass without a news story or photo being published, or posted online, illustrating Pope Francis living out the faith he calls us to lead.

Last week, Pope Francis issued a document, “The Joy of the Gospel,” that sets up many challenges for the church and society, including a challenge to affluent nations. The document’s first subtitle set the tone: “A joy ever new, a joy which is shared.”

The idea of sharing joy, which can hold different meanings, apparently upset radio talk show host Rush Limbaugh, who called the pope’s remarks on the economy of exclusion, or excluding the poor from economic justice, “pure Marxism.”

“It’s sad because this pope makes it very clear he doesn’t know what he’s talking about when it comes to capitalism and socialism and so forth,” said Limbaugh on his radio program one day after the release of “The Joy of the Gospel.”

What Limbaugh fails to understand is that Pope Francis is addressing economic inequality from a pastoral perspective, not from a Wall Street executive’s mentality. His words are backed by a hundred-plus years of Catholic social teaching. Where profits and losses register dollar signs to Limbaugh, the pope sees faces of hungry children and hears cries of the poor.

Pope Francis said that just as the commandment, “Thou shalt not kill,” safeguards the value of human life, “we also have to say ‘thou shalt not’ to an economy of exclusion and inequality. Such an economy kills.”

He explained that economic systems which allow people to fall between cracks need to change.

“Some people continue to defend trickle-down theories which assume that economic growth, encouraged by a free market, will inevitably succeed in bringing about greater justice and inclusiveness in the world,” said Pope Francis. “This opinion, which has never been confirmed by the facts, expresses a crude and naive trust in the goodness of those wielding economic power and in the sacralized workings of the prevailing economic system.”

This statement apparently hit too close to home for Limbaugh, who said the pope’s words on economic justice are “totally wrong. I mean, dramatically, embarrassingly, puzzlingly wrong.”

Limbaugh defends his arguments by linking the pope’s writings with socialism, Marxism, the Obama administration and failed Democratic policies.

Anyone who has listened to Limbaugh knows that compassion for the poor is not a topic worth his air time. His preference is to attack, mock, insult and shame the same people Pope Francis is calling us to embrace as Jesus.

Francis is not the first pope to challenge economic systems, as Limbaugh would have us believe. Both Blessed John Paul II and Pope Benedict XVI warned about the dangers of economic injustice.

Hunger and ecological emergencies “point to growing evidence that the logic of profit, if dominant, increases the disproportion between the rich and the poor and brings a ruinous exploitation of the planet,” Pope Benedict said in 2007.

Pope John Paul, during a 1993 address in Latvia, said that Catholic social doctrine “is not a surrogate for capitalism.”

Contrary to Limbaugh’s statement, when it comes to capitalism through the lens of faith, charity and love, Pope Francis, like his predecessors, knows what he’s talking about.