The Antigo girl, with only eight years of potential New Year’s resolutions under her belt, has raised thousands of dollars for the local animal shelter, plus helped put a rescue dog back to work after a potentially career-ending injury. 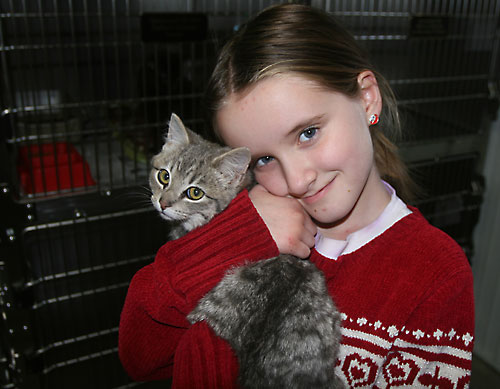 And she’s just getting started.

“We’ve had some obstacles, but we’ve been able to keep going,” Juli says. “It makes me just awesomely happy.”

Juli, a third grader at All Saints School in Antigo, is the founder of Caring Paws, an animal welfare organization. Langlade County Humane Society is the current beneficiary.

Just before Christmas, she presented the society with a check for $4,473.61, earned through months of fund raising in local elementary schools with a healthy dose of community support.

A daughter of Ed and Barb Bauknecht of rural Antigo, Juli says her love of animals likely started in the womb, and her first memories include looking up at her family’s beagle, Max, and thinking “what is this monster?”

A succession of other animals followed, including another beagle, Rex, and now a tiny Shih Tzu-Havenese mix incongruently named Buster, whose birthday is 12 days before Juli’s.

Always precocious, when she was 5 she heard about Brett, a member of a regional canine emergency response team who was seriously injured after falling 110 feet in a training exercise.

“She asked me, ‘Who rescues the rescuers?’” her mother Barb said.

“I saw him in the news and I said I had to help him,” Juli recalls.

By the time she was finished with the “Bucks for Brett” fundraiser, she had collected almost $1,000 to help with the dog’s veterinary bills. It was accomplished the old fashioned way, through hard work and a community-wide rummage sale. Publicity pushed the final total past the $3,000 mark.

“I talked with Brett’s handler the other day,” Juli says. “She said he is doing great. It makes me feel really good.”

That was just the start.

Now 8, Juli started Caring Paws two years ago with her friend Hannah Walker and other classmates at All Saints School.

“It turned into this huge club,” she says.

Caring Paws got a cash boost through that most Catholic of fundraisers: bingo. For her birthday in August, Juli and her parents went to the games at the Knights of Columbus Hall and she made a vow.

“I said that if I won, I would give it to the humane society,” she says.

Amazingly, she did just that. Most went into the bank for her education, but $500 was set aside as the seed money for the latest Caring Paws fundraiser.

Knowing everyone loves puppies, and using the media savvy gained through the prior fundraiser, she went to local elementary schools, talked to the various school principals and gained permission to hold raffles and penny wars between classes, all in support of the local humane society.

“Juli is absolutely a go-getter and she’s just a wonderful student,” principal Paul Galuska said. “She really took the initiative on her own.”

Schools involved included All Saints; Spring Valley, Pleasant View, Crestwood, North, East and West elementary schools in the Antigo district and Peace Lutheran School. The top three classrooms received a pizza party, free bowling at North Star Lanes in Antigo and a $50 gift card for Walmart for the classroom to spend on “something fun,” she says.

She also gathered items for a rummage sale of her own, and sold tickets around town for a raffle. Antigo Mayor Bill Brandt was among the first buyers.

Juli pounded the pavement and got all the prizes donated, including a selection of lottery tickets, free adoption fee from the humane society, a bowling party at the local alley, free dog grooming session, a dog toy basket, a charcoal grill package and $100.

By the time the last dollar was counted, she was able to present the humane society’s board of directors with the substantial check.

In return, she received a plaque, presented on Christmas Eve, a cage dedicated in her name, and, most importantly, innumerable hugs every time she visits the facility.

“I originally was hoping to raise $800,” she says. “When that total went over $4,000, and I presented them with the check, one of the girls there almost fainted.”

Juli is not finished, not by a long shot. Her mind is already churning with new plans. Knowing that fund raising fatigue can be a quick killer of a good idea, she is biding her time, aiming for a big project about every three years.

“I’m thinking about ‘Diving for Dogs,’” she says. “Maybe something with the high school swim club. I’m really not sure yet.”

She has printed up business cards with a Caring Paws message and is actively seeking members of all ages.

“Juli is doing these things for the right reasons,” her mother says. “We’re very proud parents of such a dedicated child for such a good cause. She is a very motivated girl.”

No matter what, animals will likely remain at the forefront of her efforts.

“These things are all good incentives to keep me going,” she says. “I will always love animals.”

Many philanthropists whose ages are Juli’s squared, would be happy with her level of accomplishments. But she has much more in mind.

She hopes to attend college in Hawaii — she has visited the state twice — and major in marine biology. Her backup plan might be closer to home, studying veterinary science at the University of Wisconsin.

“That way, I’ll be able to help more animals,” she says.

Words to live by: “Never give up love, especially for animals.”