MANITOWOC — For the first 20 minutes of their 12 1/2-hour bus ride from upstate New York back to Manitowoc, head coach Phil Budervic and five members of the Silver Lake College of the Holy Family men’s basketball team sat silent. 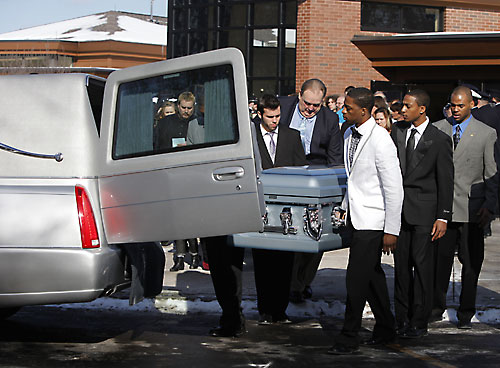 Members of the Silver Lake College of the Holy Family men’s basketball team in Manitowoc carry the coffin of Stephen D. Smith after the Jan. 29 funeral Mass for Smith, Tyler Doohan and Lewis J. Beach at St. John’s of Rochester Catholic Church in Fairport, N.Y. The players traveled 12 1/2 hours from Manitowoc to be pallbearers after hearing how Tyler, age 9, died saving six relatives from a fire that destroyed his grandfather’s upstate New York home. Beach and Smith also died in the fire. (CNS photo | Annette Lein, courtesy Democrat and Chronicle Media Group)

It was a time for reflection, considering what they’d just been part of.

“And then that’s when I asked them, ‘How did it make you feel to put a smile for a few minutes on the faces of a family going through the worst day of their lives?” Budervic said. “One of the players said, ‘It was the best feeling in the world to do that.’ That’s when I knew we had done the absolute right thing to go. We helped a family and paid our respects to a true hero.”

It was only one day earlier, on Jan. 28, that the Silver Lake College contingent boarded a bus and traveled to near Rochester, N.Y., determined to honor 9-year-old Tyler Doohan, a boy none of them knew but whose heroism touched people’s hearts around the world.

On Jan. 20, the fourth-grader was sleeping over with several other people at his grandfather’s trailer home in Penfield, a suburb of Rochester, when a fire broke out at about 4:45 a.m. 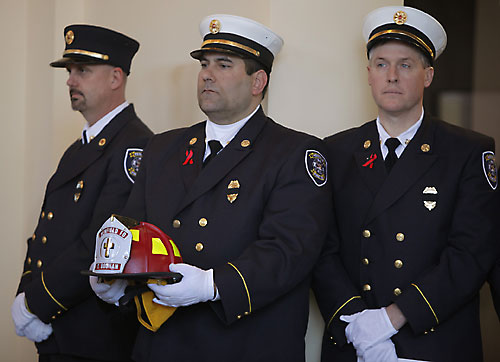 Tyler went through the trailer and helped save six people, including two children. He went back in to try to save two remaining relatives — one of whom had lost a leg due to diabetes and used a wheelchair — but none of the three came out alive.

Budervic was looking at his computer screen when a news flash about the tragedy flashed on the screen.

“I saw the face of that boy and read about what he did, and it just moved me to tears,” Budervic said. “I thought, ‘We have to do something, this boy’s a hero — a hero in every sense of the word.’”

Budervic contacted the local fire department in New York, which in turn spoke with Tyler’s family. The family was so moved by the team’s offer to help that they invited the coach and players to attend. 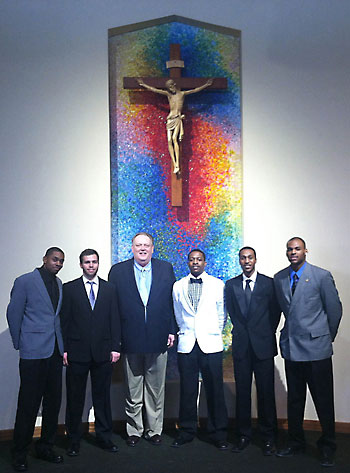 Several members of the Lakers basketball team volunteered to serve as pallbearers, but Budervic had to whittle them down to five.

The players, who traveled nearly 1,600 round-trip miles to pay their respects to Tyler and show support for his family and friends, were Darius Barnes, Aaron Davis, Derek Domino, Chris Jones and Austin Allen-Walker.

Budervic said he and his players met privately with Tyler’s mother, father and stepfather shortly before the funeral at St. John of Rochester Catholic Church.

“They personally thanked us for coming,” Budervic said. “That was really a surreal moment for me and the players. I think that was when it really hit us. She (Tyler’s mother, Crystal Vrooman) gave each of us a hug. It was just a very emotional moment.

“People really appreciated that we came to show our support, and we were happy to help in any way we could,” Budervic added. “We weren’t out of the van one minute when we got to town and there was a large group of people asking if we were from Silver Lake College. They said, ‘We want to thank you for coming to honor Tyler.’ It was such a warm welcoming. It’s not something we were looking for, but to see how gracious everyone was meant a lot to us.”

“You really get to see what genuine, classy individuals they are,” he said. “Some of the best kids in the world are in our program.”

Among the digital images transmitted around the world was one of Budervic and the players serving as pallbearers at the funeral. Budervic said he wishes all the things people do to help others could receive as much attention.

“I feel sort of guilty we’re getting this type of coverage when there are so many things people do that don’t get this coverage,” Budervic said. “From the sisters (Franciscan Sisters of Christian Charity), to the president (SLC’s Dr. Chris Domes), to the faculty, to the staff, to the students at Silver Lake College, there are so many good things being done. For example, last spring, students went to Joplin, Mo., to help build houses (in the wake of devastating tornado damage).

“Helping others is what we do at Silver Lake College. If someone needs help, we will help them,” he said. “With our program, it’s first and foremost about life lessons — our core values are compassion and community; basketball comes second.”

At the end of the day, though, Budervic said, it was all about Tyler.

“He’s the hero here,” Budervic said. “He’s the one we all should try to be like in our lives — doing whatever you can to help others. He’s just an absolute hero.”